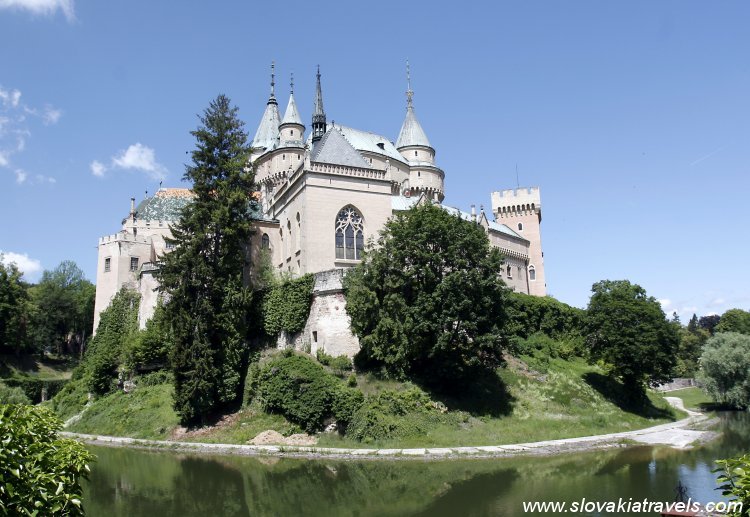 The first written records of its existence come from 1113 in a document from the Zobor abbey. In this document the inhabitants of Bojnice come called inhabitants of the suburb ("suburbani"), the sources of the spa was called the warm sources ("fleridus fons") and the close town of Prievidza like "Preuga".

Originally the fortress was made from wood and grew out of the older fortress. Gradually over the 13th century it was built up from stone. The outer walls of the fortress were shaped according to the uneven rocky terrain, so creating the irregular outline with extended fortification. At the end of the 13th century Bojnice was seized by the magnate Matus Cak Trenciansky and the fortress remained in his hands until 1321. After him, in the 14th and 15th centuries, ownership of the fortress changed hands between the following noble families: Gileth, Leustach and Noffry.

The result of the building activities of that time is the preserved outline in the shape of an extended oval of the central living quarters of the fortress built around the small courtyard with well. Bojnice fortress and its domain were always part of the Royal property, with the King handing out pledges or privilege of heritage to the given magnates. In 1489 King Matej Korvin presented the fortress together with its domain to his illegitimate son Jan Korvin. It is rumoured that King Matej himself took pleasure in visiting Bojnice and would sit under the lime tree opposite the fortress’s entrance, which was named the King Matej Lime tree. He would dictate official documents in its shadow, which would begin: "Sub nostris dilectis tillis Bojniciensibus".

After the death of King Matej the fortress was seized by the Zapolsky troops, who inhabited it till 1526. At this time a mighty fortress fortification was built, which, with its walls and towers, has remained preserved till the present day. The lowering bridge at the entrance gate connected to the inner fortress walls interrupted at regular intervals by the four towers, with the outer enclosure fortification were also built at the same time. In 1527 King Ferdinand I. presented the fortress to Alexej Thurzo. The Thurzos renovated the fortress and transformed it into a renaissance seat. The original Gothic fortress received the character of a renaissance castle with equally high living quarters arranged around the internal courtyard. 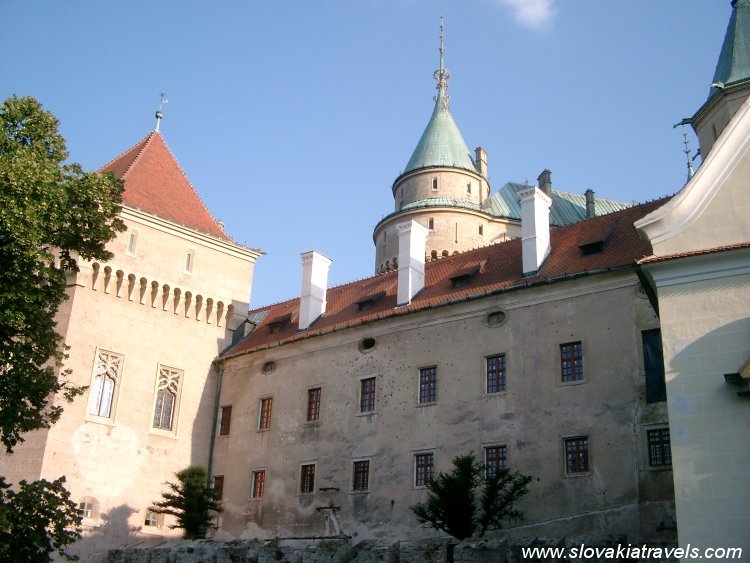 After the Thurzo family died out, the fortress once more fell to the crown and King Ferdinand III. presented it to Pavol Palffy in 1644 for his assistance in the battle against the Turks and rebellious Hungarian nobles. Construction began once more in Bojnice and the fortress received a baroque resemblance. In this stage of building the old stone of the fortress was not fully taken into consideration, with the result that the living and representational quarters were shifted to the forefront of the fortress. Construction work to the fortress quietened down at the end of the 17th century and its facade did not alter throughout the 18th and 19th centuries.

After a long period of stagnation and deterioration, Bojnice together with its domain was obtained by its last owner Count Jan Frantisek Palffy in 1852. He was a renowned private collector who through his efforts raised the overall standard of the fortress. The

French gothic castles of the Loire valley. The extensive neo-gothic renovation was carried out during the years 1889 to 1910 and changed the fortress into an enchanting castle. Count Palffy did not live to see its completion as he died in Vienna on the 2nd of June 1908. In 1945 the castle of Bojnice was confiscated from the state and from 1950 in its inside it is situated a museum. In 1970 the castle was declared as a National cultural monument. 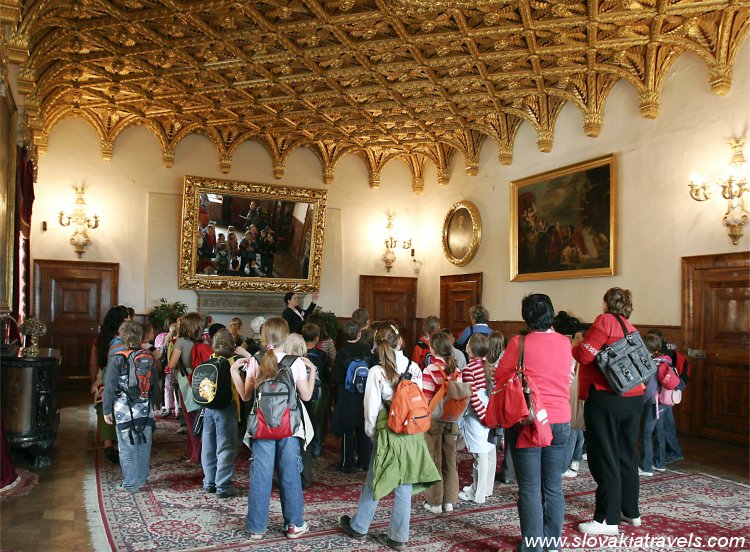 Exibitions of the Bojnice castle: In the introductive parts: are situated the duke apartment, the tower with 5 angles, the winter garden, the gallery, the dinnig room, the Oriental room, the Music room, the Golden Hall, the chapel of the castle.
In the central part of the castle are: the Blue Room, the Great Hall, the Marble Room, the Hunting Room and the Escutcheon Hall, the food preparation areas and sleeping quarters. At the top of the stairs there is the Knights’ Hall, the Hunady Hall and in undergrounds of the castle are situated the tombs and the Castle cave.

Every year (in May) in the castle is organized the International Festival of Ghosts and Spirits. 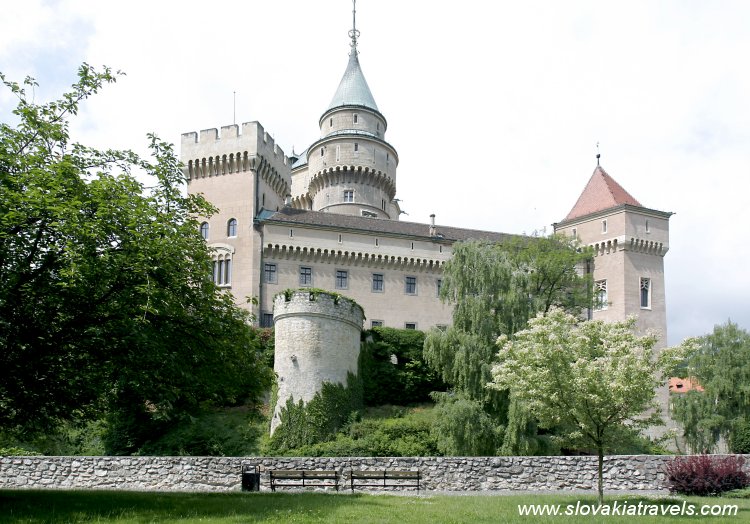 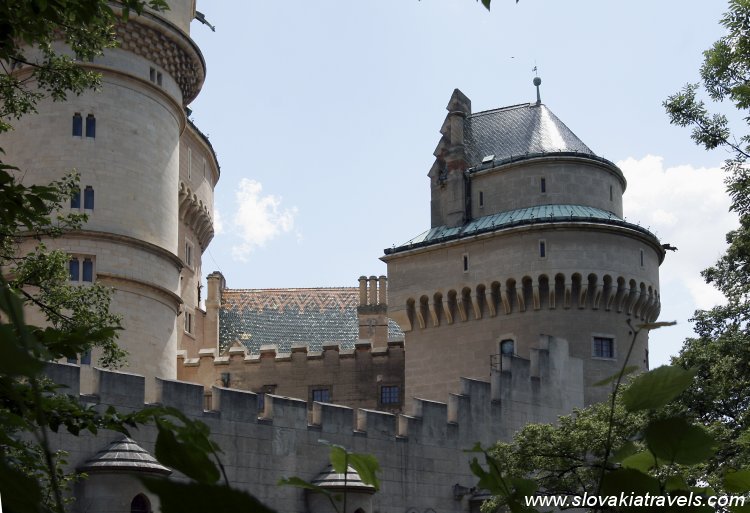 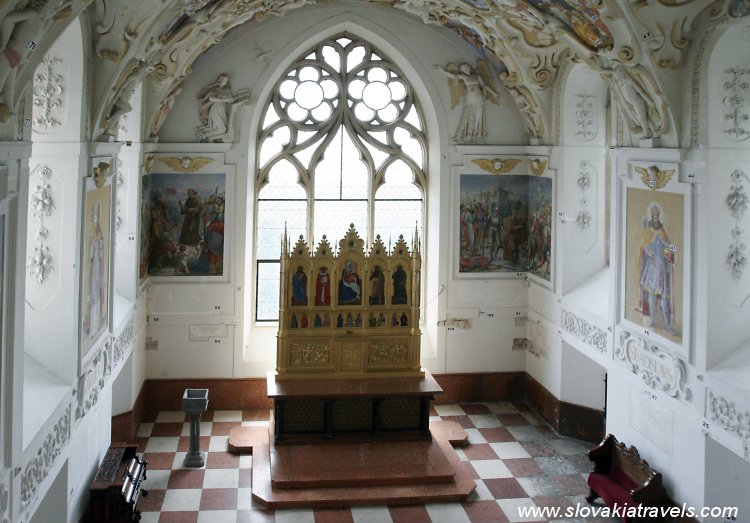 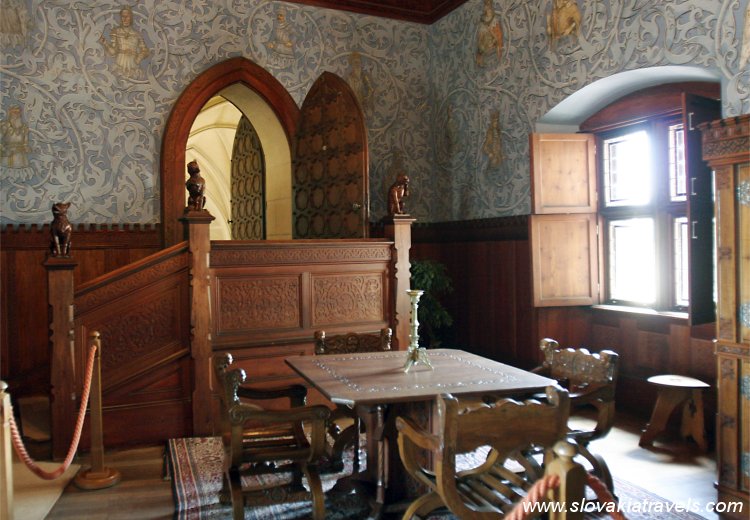