The castle was the metropolis of the Great Moravia Empire during the 9th century. It is the more important and the most precious monument of the city. In 830 here was consecrated the first Christian church in the territory of Slovakia. Its architectural appearance has remained unchanged since being originally acquired in the l7th century. The complex of the castle consists of four independent parts - the cathedral, the Bishop's palace, the outbuildings and the well-preserved outer fortification containing a single entrance gate to the interior of the castle.

CATHEDRAL OF THE CASTLE

Is composed from three churches; The Church of St. Emeram - it is the more ancient part of the cathedral, built sometime between the 11th and l3th centuries. The church houses a historically valuable l3th century torso-relief statue discovered here during reconstruction activities. The southern wall houses the reliquary with relics of St. Cyril which were sent here from Rome. The Upper Church - This one-nave Gothic cathedral was built on the highest point of a rocky elevation on a narrow space between a steep hill and a Romanesque church, with which it is connected. The construction took place from 1333 to as late as 1355. After 1711, when the castle lost its strategic importance, the whole cathetral complex was rebuilt in Baroque style after the design of the Italian architect Domenico Martinelli. The most precious monument of the Upper Church is the main altar of the Saviour with fresco painting from Austrian painter Anton Galliarti.

The Lower Church - is the latest section of the Cathedral built between 1621 and 1642. The more precious object of its inside is a convex sculptured relief called the "Deposition" of Austrian sculptor Johann Pernegger.
Under this sculpture in a predella is a smaller marble relief with a scene of "The Burial of Christ". This sculpture has been ascribed to the renowned Italian sculptor Donatello or to his school. 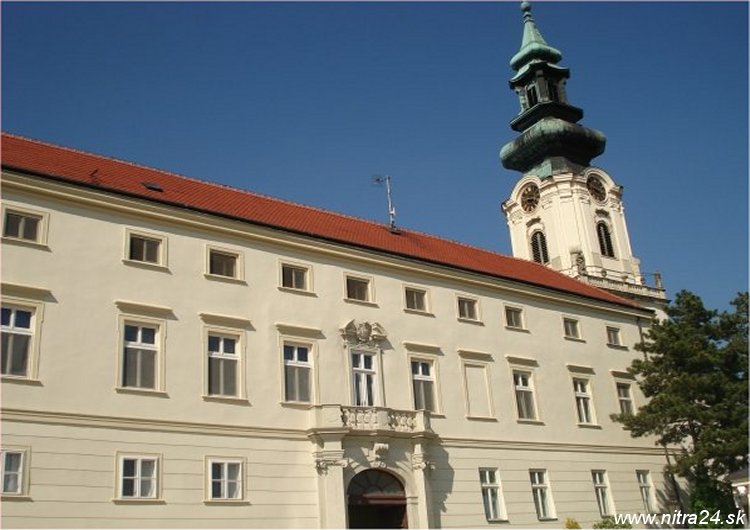 The foundations of this palace date back to the Middle Ages. The last restoration of the palace has been executed in 1732-39. To the ground floor is situated the seat of the bishop, instead to the first floor is its residence. The palace is closed the public.

On the construction of the palace captures one's attention a stone statue of Atlas supporting the sliced off corner, called also Corgon from the inhabitants.
The statue is the work of the Slovak scultore Vavrinec Dunajsky in 1820. Over the entrance there is the coat of arms of Kluch bishop, that it made to construct the palace for the canonical ones. 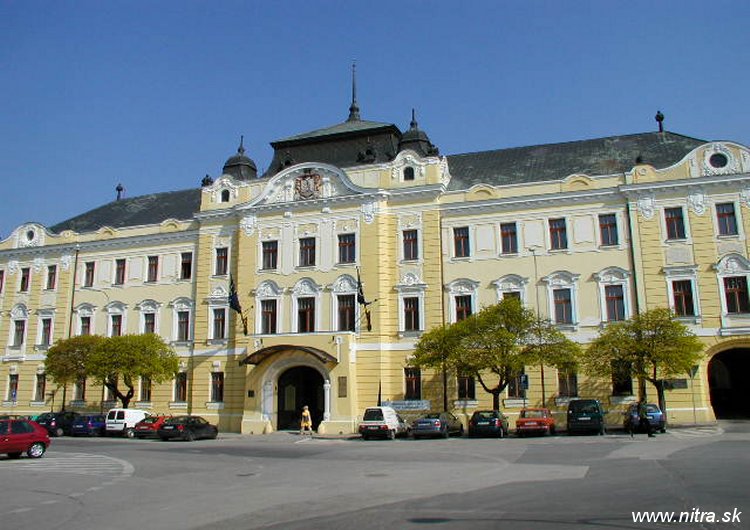 It is situated between the Upper Town and the Lower Town. The Distric house was constructed in 1823. The whole building was rebuilt in the Art Noveau style from 1903 to 1908. Today it is the seat of Nitra State Gallery. 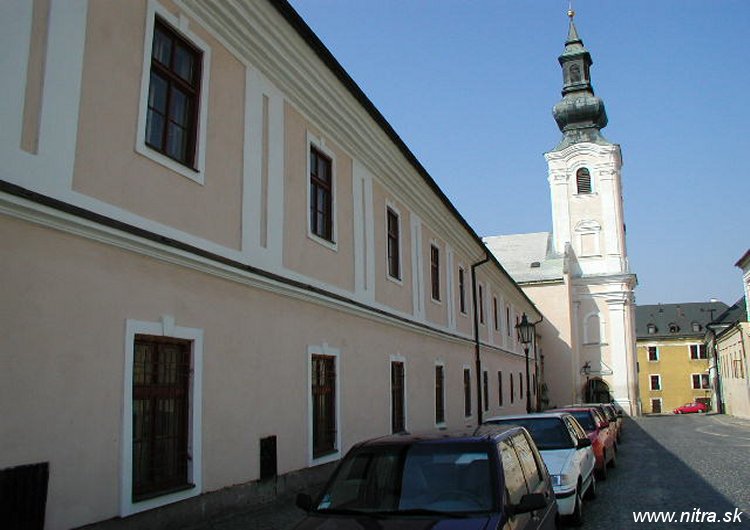 The church with one nave dating to 1630. The main altar of the church consists a picture of St. Peter and Paul of 1935. The walls of the church and its side chapels are decorated with a unique series of 33 relief convex sculptures, that represent illustrations of legendary scenes from the life of the founder of the Franciscans order. The present aspect of the church is of 1724-1763. 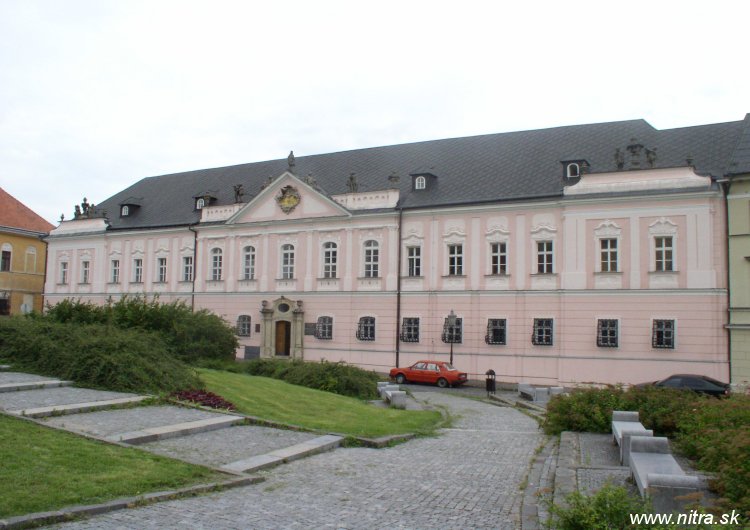 It is the monumental construction of 1768-70, and the center of the theological faculty of Comenius University in Bratislava. The diocesan library is situated in the north-east section of the building. It was first opened in 1877 in the presence of the Austrian Emperor. This collection of books represents the greatest value of all libraries in Slovakia.

It is a baroque column, called also the plague column.
It was built by Bishop Eszterhazy in 1750 to commemorate the plague epide mics in 1710 and 1739.
Among the similar plague columns, it belongs to the most valuable and most beautiful in Slovakia.

NUNNERY AND THE CHURCH OF ST. VICENT DA PAUL

Architecturally, the church is notable for its Neo-Romanesque style. It is a three-nave building with three altars constructed between 1854 and 1861. This extensive complex of buildings consists of the nunnery, nursery school, the hospital. The most valuable and dominant feature of whole complex is the church of St. Vincent da Paul.

This Baroque church was constructed in 1739, on the gently sloping hillside of the square, called Na Vrsku, in commemoration of the end of the plague epidemics.

The foundation stone of this monastery was laid on the 9th of June 1701 by members of the Piarist order. Its construction has been marked from various problems, the war, fires. In 1716, the nearly completed church was destroyed by fire.
Later in the same place it has been constructed between the 1742 and 1748 new monumental church in baroque style with two towers.

CHURCH OF OUR LADY ON THE CALVARY

The church of 1678, is a very important cultural and architectonic monument.
From the beginning of the l8th century to the present, the Church of Our Lady has been a well known place of pilgrimage.