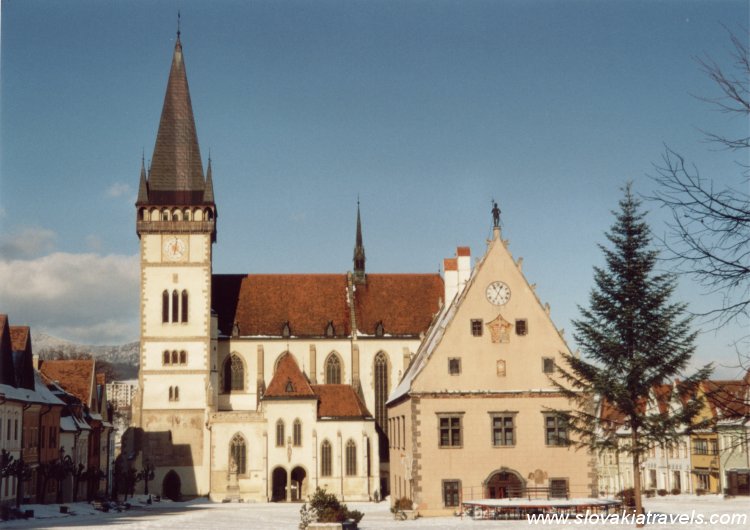 This three naves basilica dating back to beginning of the 15th century. It was created thourgh the reconstruction of a previous religious building which is referred to in a charter of 1247. The interior of the St. Egidius church is one of the most sumptuous gothic interiors in Central Europe. More precious part of church's interior is the collection of gothic altars with panel paintings and bas-relief, dating mostly from the years 1460 and 1520. 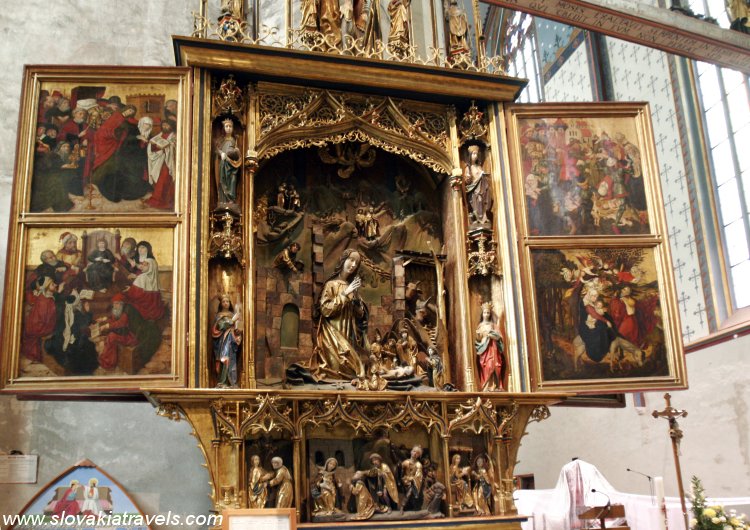 The most precious between these it is the winged altar of the Nativity, place in the left angle of the church dating from the years 1480-1490. The high main altar in the Gothic style from 1878 is dedicated to St. Egidius the Bishop. In the church's interior there are other precious objects like the stone baptismal font from the 14th century, a Gothic sculptural group (1479-85), the monumental Gothic pulpit from 1465 and the Gothic paintings. 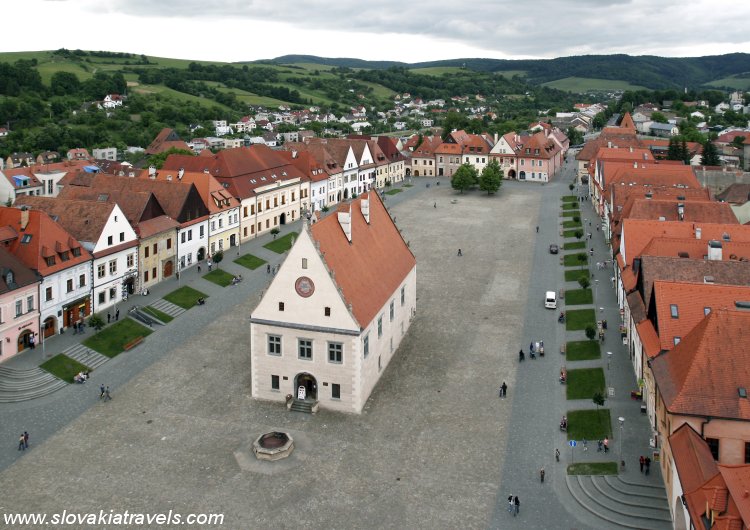 This building is unique in Slovakia, it combined elements of the Early-Renaissance typical for areas north of Alps with the fading out of Late-Gothic artistic and architectural details. The construction was started as late 1505 and 1511 by masters Alexander and Alexei.

The high stepped gables and pitched roofs, as well as the staircase oriels are unique and characterize the two-storeyed block-like building of the former Town Hall located in the middle of the square. In the years 1904 - 1905 the Town Hall was adopted to serve the needs of the newly-established Sharish Zhupa Museum (country museum). The most valuable members of the building are architectural details: the portals, sumptuosly decorated gables, entrance bay, staircase, wall-painting, timber ceiling in the Council Hall, painted signs, coats of arms and various inscriptions document. 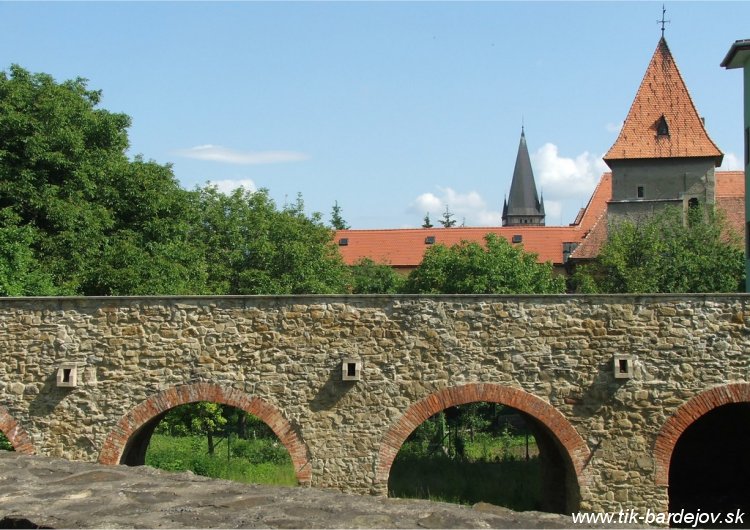 The fortification system is among the most elaborate and best preserved mediaval fortifications in Slovakia. The most ancient news written of the fortification's origin is from 1352. Other news dates from 1376, when Bardejov was declared the independent city direction. In the end of the 14th century the city was all encircled with stone walls with three main gatehouses and the water pit. 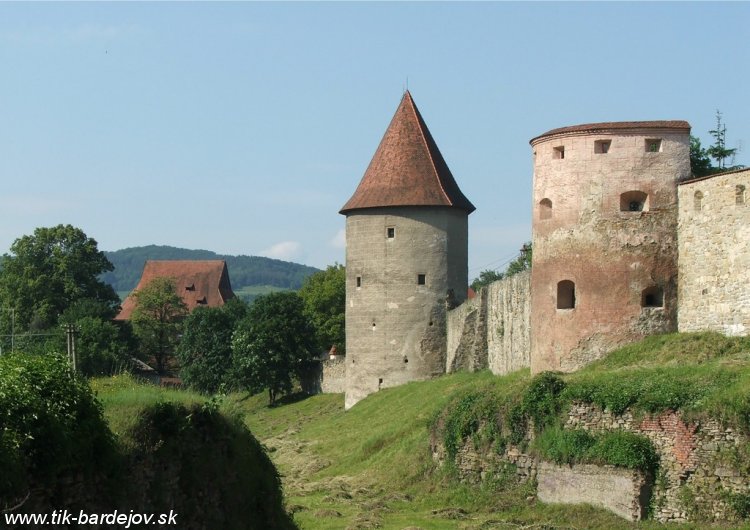 In first part of the 16th century the town fortifications was reinforced with the bastions, the best conserved are: the Archivna bastion (Record Office), Renesancna (Renaissance), Velka (Big), Hruba (Thick, that is the largest one), Kralovska (Real), Stvorhranna (Rectangular) and Skolska (Scholastic). The Bardejov fortification's system is enlisted into Unesco World Heritage List.

The house No. 13 was in originally built in Gothic style in a row of houses on the Radnicne square. It was transformed into the Renaissance style in 1566. The Rococo facade dates from 1778. The building was restored in 1978. Today it is the center of Saris museum. 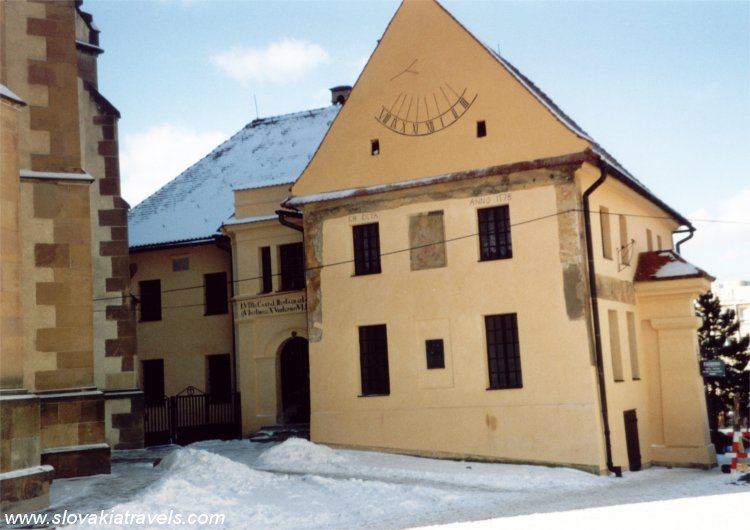 In the Middle Ages a school was attached to the parish church. Its existence is documented by a notice about a teacher, which dates from 1435 as well as by the date which was discovered on the first floor on the south facade of the Gymnasium "ERECTA ANNO 1508". Later the building was remodelled into the Renaissance style. In 1841 and 1879, the building was transformed into the classical style. A music school named after the Bardejov composer Vojtech Keller is now housed there.

THE FRANCISCANS MONASTERY AND CHURCH OF ST. JOHN THE BAPTIST

Originally constructed in the Gothic style after 1460, during the Renaissance renovation in the second half of the 17th century was vaulted. At the same time, the portion of the monastic complex which was connected up with the town walls was built. In 1759 the church was enlarged as well as the monastery. Other renovations were carried out in the 19th and 20th century. The interior furnishings, including altars, the ogran, the pulpit, ets. date from the second half of the 19th century.

This edifice in the Eclectic style with neo-Romanesque details on the fasade was built on the site of the former castle moat in 1901 - 1902. The church was consecrated to Saints Peter and Paul. The main altar to the inside is of 1903 and the iconostasi is of 1914.

This church was built in the classical style in 1798-1808 after the letters patent on religious tolerance was passed. The interior furnishings are neo-Gothic of the second half of the 19th century. The building has an elongated ground-plan with a semicircular apse, the nave features flat vaulted ceiling. 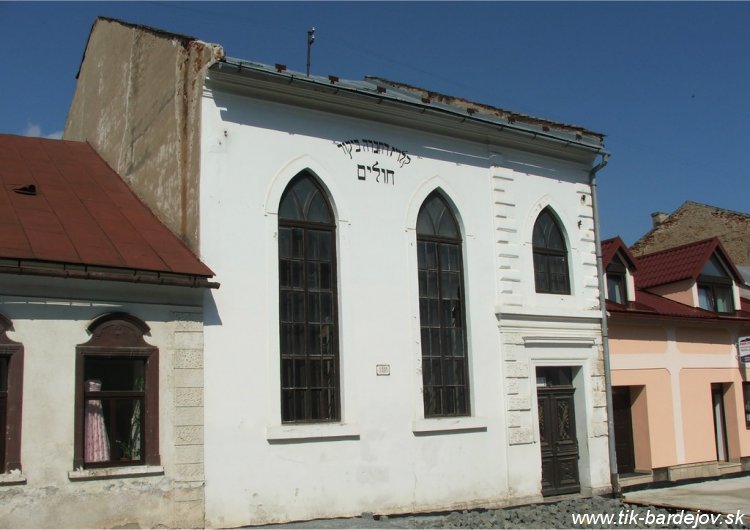 Is situated in via Mlynska No. 6 and 7 and constructed in the 18th century. The dominant part of the Jewish complex is a synagogue from the first part of the 18th century. The complex consisted of a ritual bath, an expansion tower with a boiler room, a slaughterhouse, and an assembly house (Beth hamidras). A well-preserved cemetery with sand-stone tombstones also belongs to this complex.

Is situated on the hill in the east part of the city. Were constructed between 1863-1869 and consists a sequence of small chapels, that symbolize the Stations of the Cross.