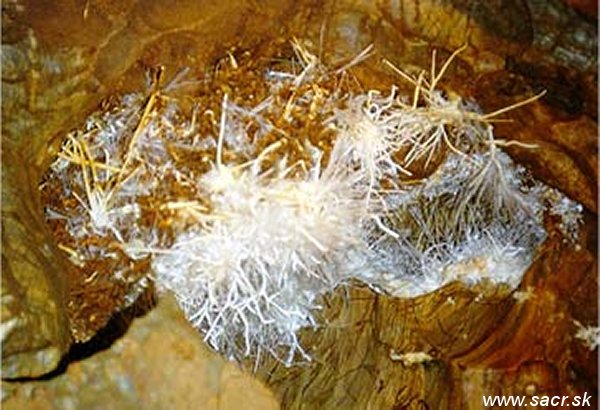 The Ochtinska Aragonite Cave is situated in the attractive landscape of the Slovak Metalliferous Mountains (Slovenske Rudohorie) between Jelsava and Stitnik. It is the unique example of cave not only in Slovakia, but also in Europe. It is one of three caves of this type accessible to the public all over the world. The other two are situated in Mexico and in Argentina. ARAGONITE - a less common crystalline form of calcium carbonate than calcite, denser and orthorhombic.

The Ochtinska aragonite cave was discovered for chance in 1954 by the workers during the geologic exploratory. In 1972 it was open to the public. The cave is 300 m long of whom 230 m are accessible. The temperature of the cave is between 7,2 and 7,8°C and the relevant air humidity is of 92 - 97%.

The most attractive part of the cave is considered the Milky Way Hall with the characteristic oval formations. It was called this way because of the long crack in the ceiling replenished of formations of white aragonites that shine like the stars in the Milky Way.