The neighbourhoods of Banska Bystrica are rich of natural beauties and particularitities, as an example the forest of Badin, the Harmanec Cave, the Donovaly ski center, the National Park of Low Tatras. 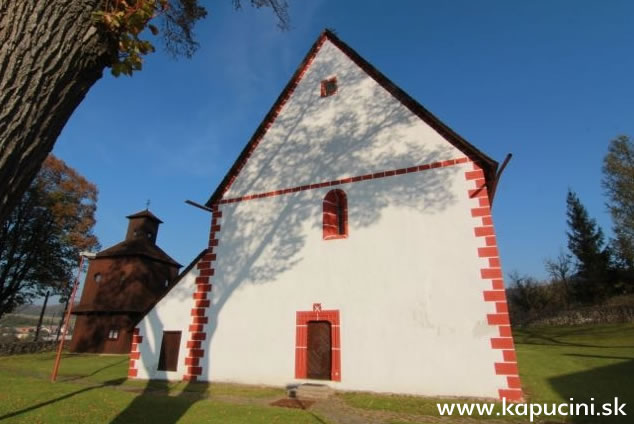 The first written news of the small village of Poniky is of 1282. In the past there were the gold, silver, cooper and iron mines. The catholic church of St. Francis Serafino with a precious frescoes of 1310, dominates the country. 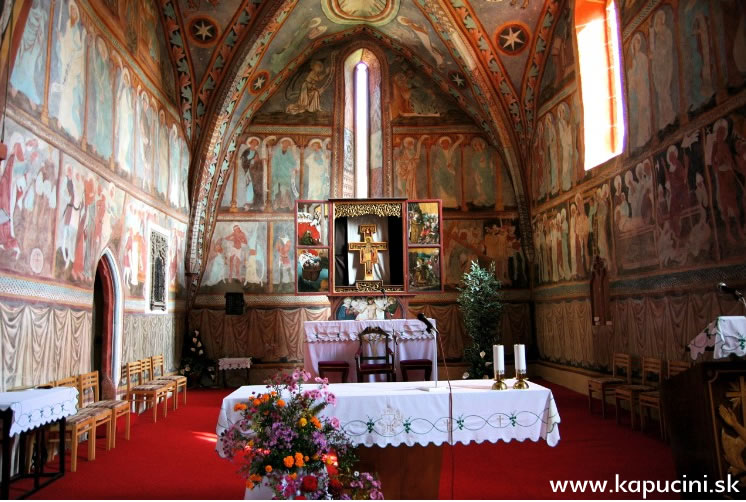 This church was initially consecrated to Saint John th Baptist and later, after the arrival of the Franciscans, newly consecrated to St. Francis Serafino. In the 2000 church it was visited from prince Charles of England during its visit in Slovakia. 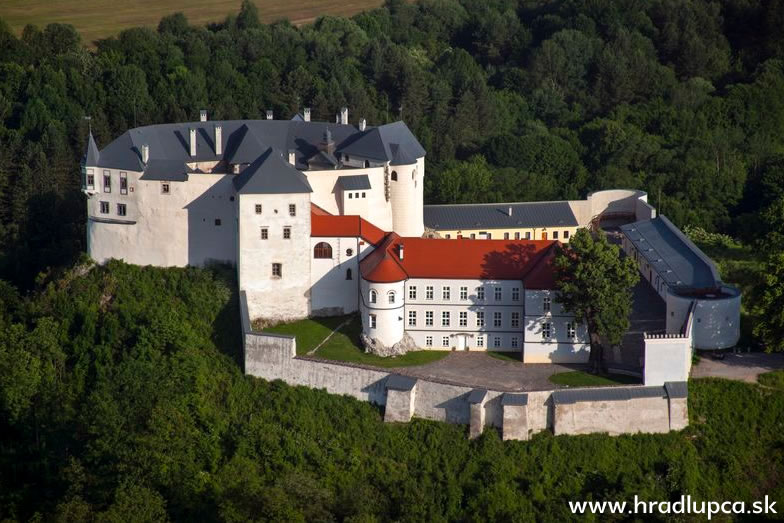 The Lupca castle was built before 1250, during the reign of King Bela IV. Originally the castle served as a hunting seat for a royal family. The castle has two parts, the inferior and advanced courtyard. The inferior courtyard is of first part of the 13th century and was various times restored.

In the years between 1875 and 1883, during the reconstruction of the castle, it was added so-called the House of Gisel, whose name derives from the greater daughter of the Queen Sissy, than made it to construct because it came used as an orphanage. In the inferior courtyard is situated the well it's 45 m deep, the rests of a protection bridge and the room of the torture. To the inside of halls of the towers in the advanced courtyard are situated some permanent exposures. 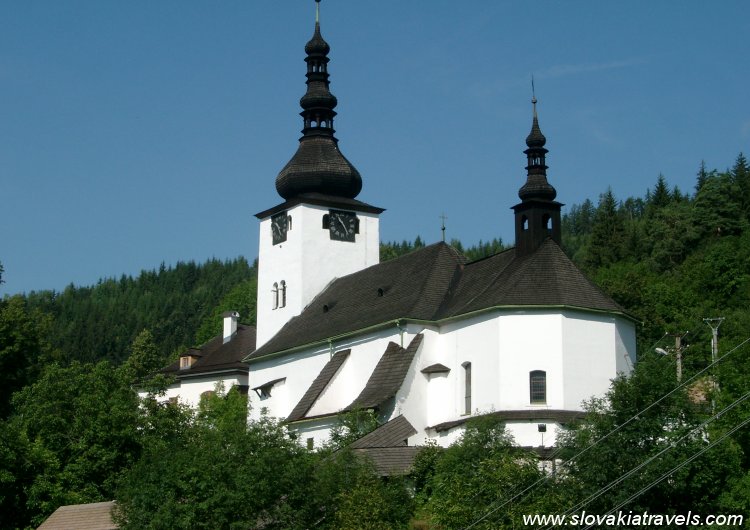 This small country with one rich mining history is situated in the south part of the Low Tatras. Of its riches mining they were at knowledge also the Roman, but in the country the extraction and the smelting of the metals is done sin already 1000 before Christ. The copper from Spania Dolina was exported in all Europe.
The galleries and the shafts furnance of the mines carried all different names, 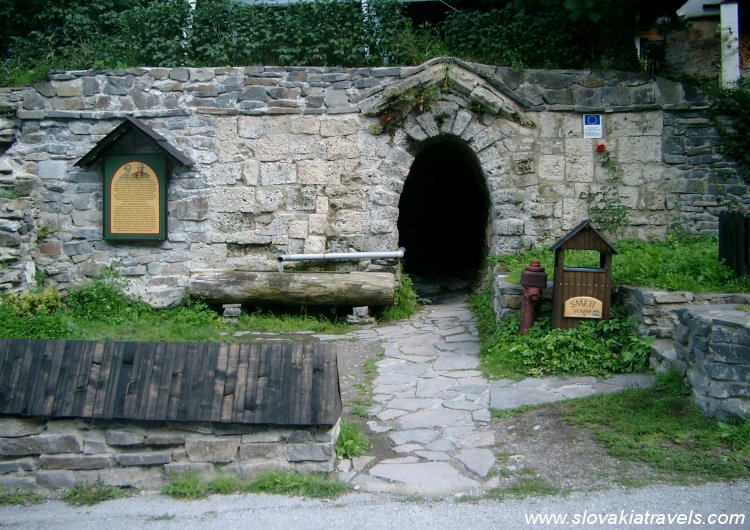 of usual names of the monarchs: the Ferdinand's gallery (Ferdinandova) - long 2000 m, The Ludwig's gallery (Ludvikova), The Charle's gallery (Karlovka), the Maria gallery (Mariina). In the 15th century they extracted 50,000 quintals of cooper and 17,282 silver talents. To the end of the 19th century the extraction in Spania dolina was stopped. Currently, in the country vige the prohibition of construction in order to conserve integrity of the country originates them. 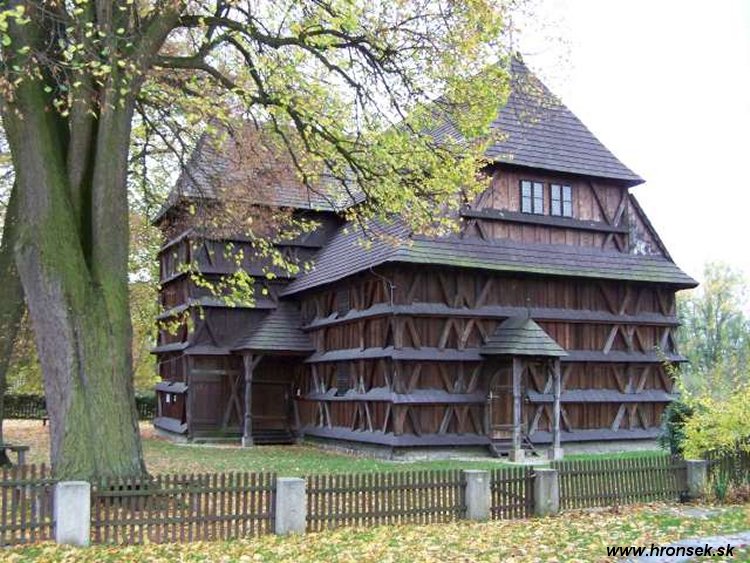 The articular wooden church in Hronsek was built in baroque style between 1725 and 1726. More late it was restored, but it has preserved the original character of the church, built without to use the iron nails.

In the church are typical Scandinavian and Germans architecture elements. To the inside are situated an organ of 1763, remained conserved very until today, the pulpit and the altar from the 18th century with wooden columns. The churches has seating capacity of 1100. On the roof of the church a rooster is lies, symbol of the reformed church.

In 2008, along with seven wooden churches of the Slovak part of Carpathian Mountain Area, it was included on the UNESCO's Word Heritage List. 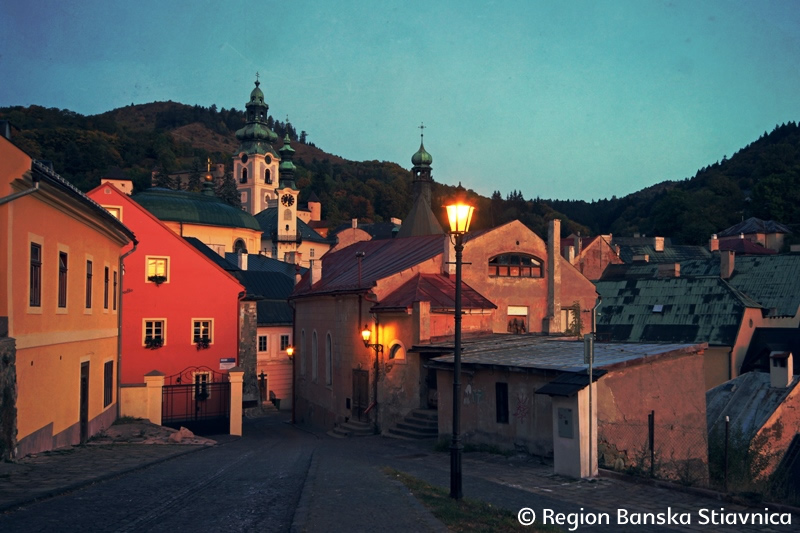 In the past the town was the main producer of silver of the Hungary and one of the most significant mining town in the Europe. The first news written on the extraction of the precious metals and silver dates from 1075. It privileges as cities of the mining industry go back already to 1238. The Stiavnica seal is of 1275 and it is also the oldest representation of town's fortifications which is a pre-heraldic topographic symbol, and with mining implements set into the Arms.

Banska Stiavnica, with its surroundings, had an extraordinary importance in the area of the public education of the mining industry. Already in 1735 in Banska Stiavnica was established the first mining school. In 1762 this school was promoted for decision of the Emperor Maria Theresa, to the Mining Academy, first example in the the world of technical Academy of this type, and was taken as an example from the polytechnic founded in Paris in the successive years. This academy remained opened until 1919, and until then it instructed hundred of specialists in mining field. 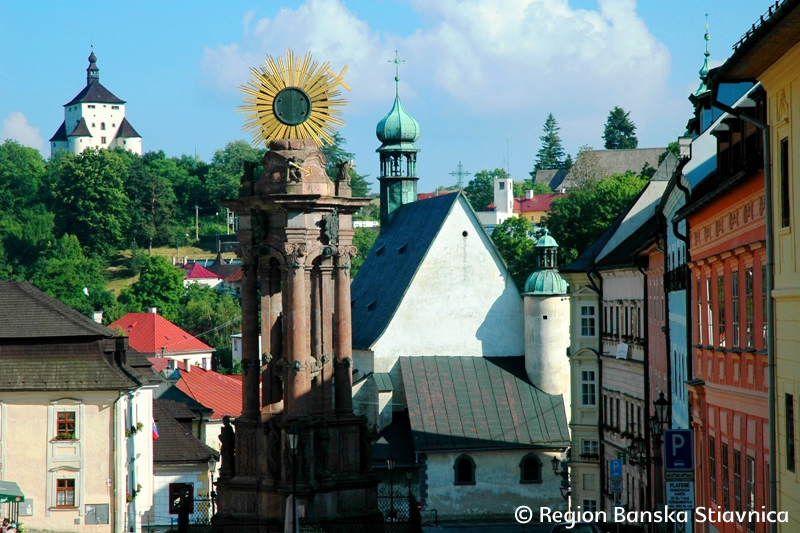 The historical nucleus of the town was declared in the 1950 the Urban conservation Areas. The characteristic symbols of the town are: the Holy Trinity plague column, the Old Castle (a former fortress against the Turks), the New Castle in renaissance style. Between the other places of interests we remember: the St. Catherine's church in Late-Gothic style - also called the Slovak church, built in years 1443-1491; the church of the Ascension of the Virgin Mary - the parish church, that in origin was a Romanesque basilica with three naves, built in the years around 1230; the Evangelical church of 1794-96, rich decorated and with a very precious organ to its inside.

The attraction of the Banska Stiavnica is the Open Air Mining Museum with an exposition of mining technique, the laboratory and a little wooden church for the miners. There is the possibility to enter in old mining rooms and to visit the historical Bartolomej gallery. The museum is closed from December to April. Singularity of monuments in the symbiosis with the environment is an object of social protection for contemporary persons and future generations. Values concentrated on the area of town and its environment were registred into the List of the world cultural and natural heritage UNESCO on December 11, 1993. 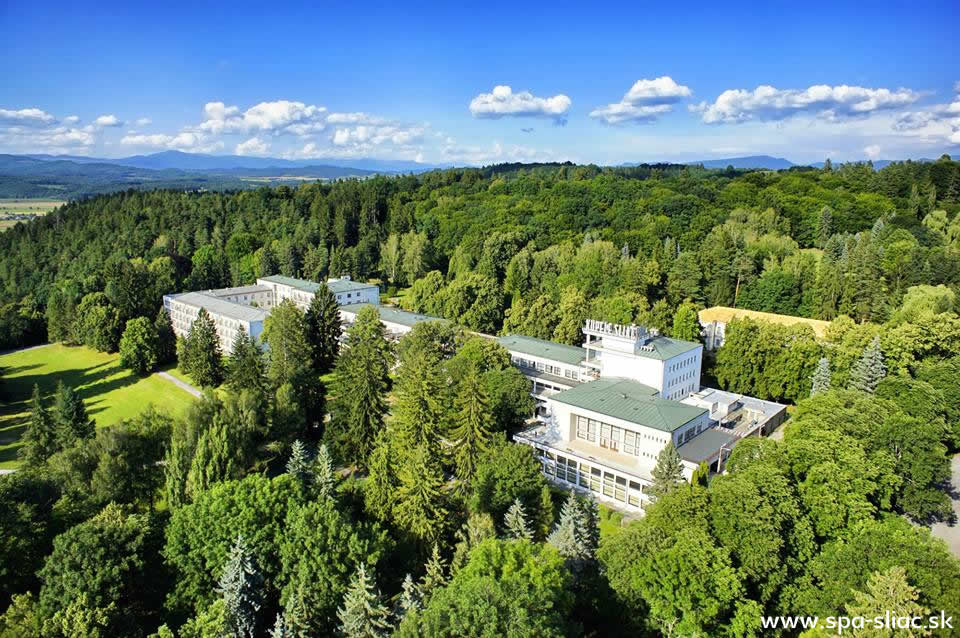 It is situated between central Slovakia’s regional centre, the city of Banská Bystrica, and the district town of Zvolen, surrounded by extensive forests, parks and plains. The oldest written record regarding the springs at Sliac can be traced back to 1244, the reign of King Belo IV.

As a spa, Sliac was in operation as early as in the 16th century. Historically it ranked among the Empire’s most popular spas. Its popularity and attraction were attributed to the healing qualities of its mineral waters as well as visits by prominent figures of politics, business and arts. The present shape of the Sliac spa, with the dominant Palace complex, dates back to the 1930.

Indications: the water of the main Spa Spring contains sulphates, carbohydrates, magnesium and calcium, as well as a high level of carbon dioxide, with an isothermic temperature of 33.3 centigrades. In the world exist only three similar spas with this type of water: in Argentine, Australia and in Spain. Sliac continues to be a highly expert health resort specialising in providing treatment the cardiac and vasal disorders, dysfunctions of cardiac valves, Ischaemic cardiac disorder with anginose attacks and conditions following the implant of a pacemaker, conditions following a severe heart attack, ischameic cardiac disorder following a severe heart attack, hypertensive disorder of the I and II stages (based on WHO classification), hypertensive disorder of the III stage in WHO classification, aggravated through,ischaemic cardiac disorder, little cerebral strokes, vascular nephrosclerosis.

Trips: short walks and trips in the surroundings, visit of Hronsek, Zvolen, Banska Bystrica, Detva, the castle of Viglas, the Harmanec and Demanova Caves. The Travel agencies organize visits half-day tourist trips to the historical mining towns of Kremnica and Banská Štiavnica, or one-day trips to the Low and High Tatra mountains. 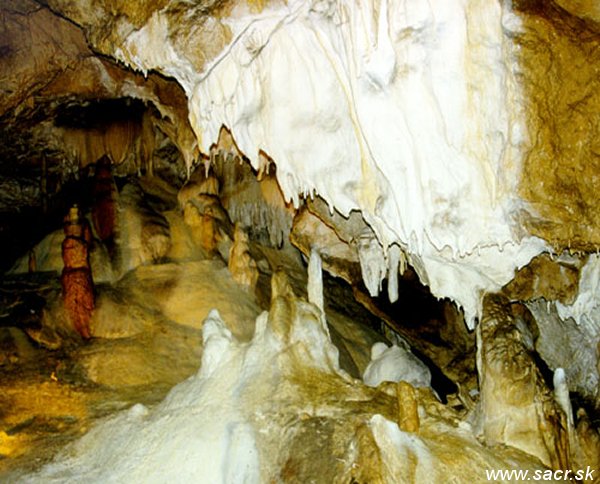 Situated in the Harmanecka valley, in southern part of the Greater Fatra, to the northwest of Banska Bystrica. It was formed in the Middle Triassic limestones by the ancient paleoflow, at two developmental levels.

The overall length of the cave is about 2,650 m. The cave is known for a rich occurrence of white soft sinter. Mighty pagoda-like stalagmites, sinter waterfalls, draperies and sinter pools can easily catch your eyes.

The later discovery of the cave in 1932 wasn’t a result of a chance but a goal-directed heavy work of 18 years old Michal Bacúrik, who after 14 day dug out a narrow opening – now the Discoverer’s Passage and entered the snow white hall later called the Discoverer’s Dome. It is interesting that the discoverer was fined for this because he didn’t have the permission from the town forest office to enter their forests.

Harmanecka Cave was opened to the public for the first time in 1950. During the visit of the cave visitors must do well in 1042 steps. The largest accessible part of cave is called the House of Pagodas, high 28 meters. The formations of huge pagodas measure up to 12 m. Inside the cave, living primitive plants and 10 species of bats.

As in all the caves here, visitors can also get into the fantasy: in the House of the Labyrinth 105 m long, you can admire the panorama on the High Tatras, then there is the petrified mirror of the cave, the Stone of Justice, which "falls" on the evil people who walk inside the cave.

The lower part of the cave is called Riecisko. Among other interesting rooms remind the Hall of peas. The lakes in green are considered the most beautiful part of the cave. Inside the cave there is a "pot", which became the symbol of the cave. It is said that one wish of the person who hits him with a coin.