The well-preserved square has retained its Medieval shape: it is a rectangle with 3:1 sides, and it belongs to the largest squares of its kind in Europe.
In the square are situates 60 burghers' houses in the Renaissance style of the 14th and 15th centuries that testify the riches of the town in the Middle Ages.

This church is a National Cultural Monument. and it is a three-nave Gothic church with a sturdy sanctuary. It was built in the last quarter of the 14th century. In 1392, the St. George's Chapel was added to the northern part of the church. The tower originates them of the church was various times destroyed from fires and therefore in the 18th century the inhabitants of Levoca constructed one new tower.

The interior of the church attracts your attention with its 11 Gothic altars, the most precious of them being the Main altar. Thanks to its size it is one of the world's highest. It is 18.62 m in height, made of limetree wood in Master Pavol's workshop. Other important objects of the church are: the altar of St.John of 1520, the altar of St. Peter and Paul of 1500, the altar of the Virgin Maria the Snowy, the altar "Vir dolorum" of 1480 approximately, etc. Between the important works of art we remember also some frescoes, most ancient of which it is of the half of the 14th century, but also some handicraft works, like as an example the pulpit in the Renaissance style of 1626, the wooden senators' pews of the 15th and 16th centuries, the metal font of 1400, the rich decorated organ, than for along time it has been one of the greatest organs in Hungary.

The Town Hall of Levoca dates back to the 15th century. It burnt down in 1550, and there was another fire in 1599. In 1615 the Town Hall was enlarged and the southern part, as well as the archways on the first and second floors, were added. 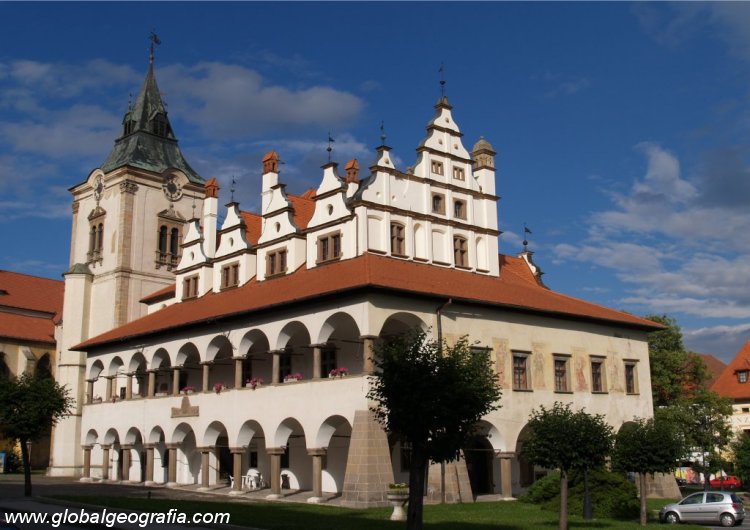 In the corner of the southern facade, there is a remain of the original painting. More paintings were placed between the windows. The paintings represent symbols of civil virtues: moderation, carefulness, bravery, patience and justice. The building of the Town Hall is attached to a Renaissance tower, which was built between 1656 - 1661 as a bell-tower. There are some expositions of the Spis Museum on the first floor of the Town Hall. Its Session Hall is used for representation purposes.

CAGE OF THE SHAME

It comes from the 16th century and it was used for punishing for minor delinquencies. Its original place was where the Protestant Church is situated now. Later, it belonged to the Probstner family and it was placed in their park, which was situated where the hospital is now. The Cage was given to the town by the Probstner family in 1933 and since then, it has been situated in front of the Town Hall. 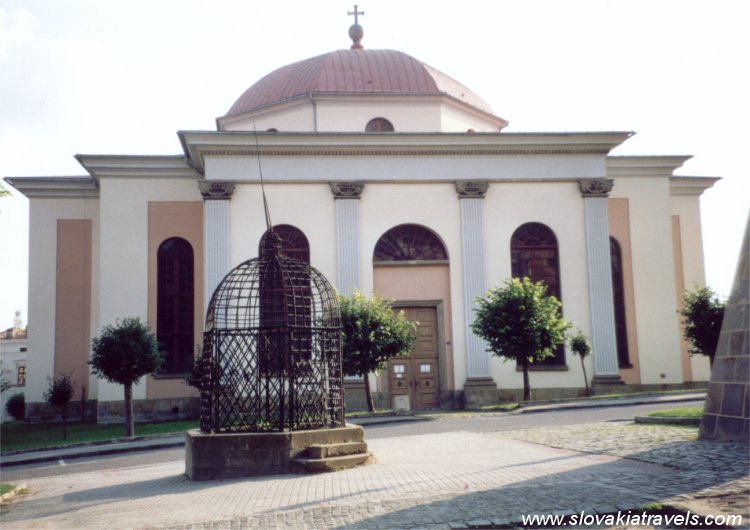 There is a Greek-cross-shaped building in the south of the square, with a huge dome. It was built in Classicistic style by Anton Povolny between 1825 -1837. There is an organ, archives and a valuable library. In this church, there is a well-preserved Baroque wooden cross and another, forged, cross. A famous painter from Levoca, Jozef Czauczik, made the large altar picture of Christ walking on the sea.

It used to belong to the complex of buildings in the park, just like the goldsmiths' workshops. Originally, there was a school here, which is proved by the coat of arms opposite the church. It was rebuilt into a higher standard school in 1588. The town's armory was situated here, too. Between 1587-1588 the buildings were joined together. After the reconstructions in 1810 and 1858 - 1852, there was a grammar school, casino, confectionery, restaurant and appartments. Today, being restored again, the building is the seat of the town's administraton. 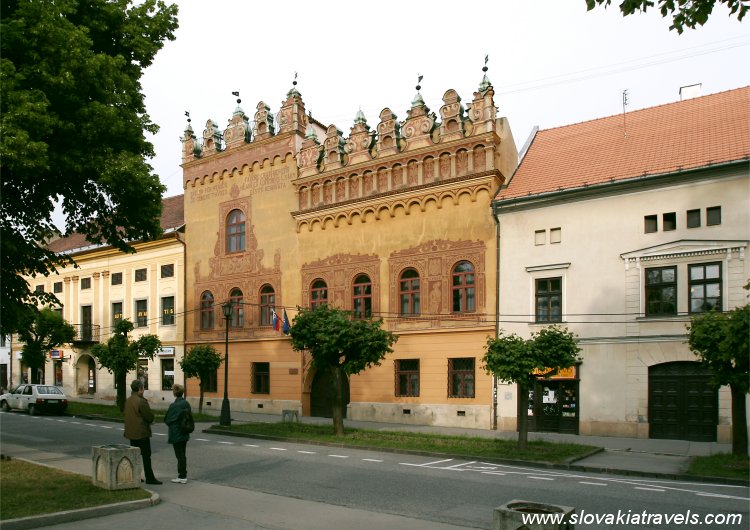 House No. 7 on the square, is distinguished from the other bourgeois houses for its well conserved Renaissance attic. The facade of Thurzo house has a rich decorates with sgrafitto of 1903- 1904. The house was obtained from the union of two buildings of the 15th century. The house belonged until 1532 to a famous Levoca's family, the Thurzo family. Today it is the seat of the State Regional Archives.

House No. 20 is situated in the east part of the square. In the house lived and created Master Paul of Levoca, the great medieval sculptor and carver. He is the author of the main altar of the St. Jacob's church and the other important artistic works. The present aspect of the house has been conserved from the 15th and 16th centuries. Today the restored house is the Museum dedicated to Master Paul.

House No. 43 in the west part of the square, was constructed in the 15th century. The house has a spectacular stone portal of 1530, but above all the excellent interior. Very interesting is also its Renaissance courtyard with loggia and archades, typical for the town of Levoca.

House n. 44 attracts the attention for its facade rich decorated with pyramidal paintings and decoration. The house is of the 16th century and belonged to an important merchant of Crakow, Sebastian Krupek.

House No. 45. In the 16th and 17th centuries belonged to one known medical family. The facade of the house is rich decorated in the Renaissance style. The attention of the visitors is attracts also from its interesting door of entrance, all striking by hand. 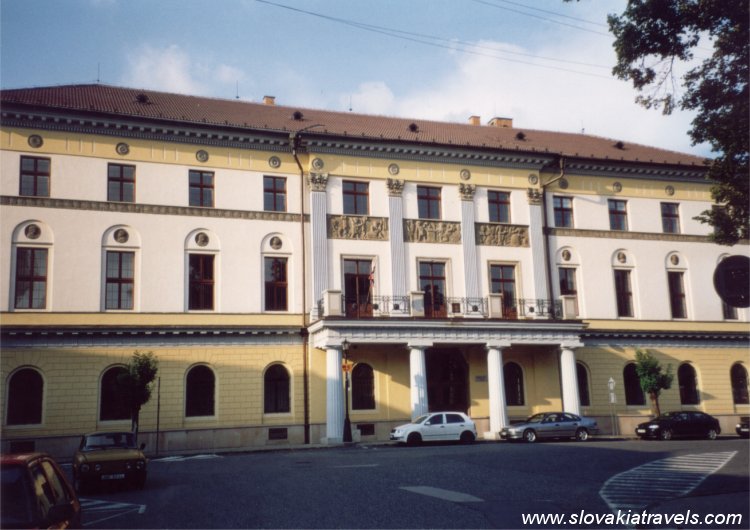 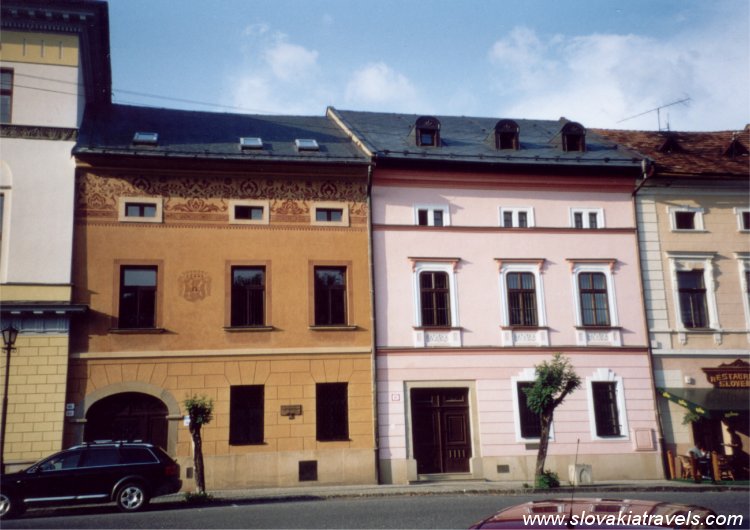 The facade of the house No. 60 is decorated with sgrafitto and between the windows the coat of arms of Spis Province may be seen. After the construction of the large Provincial House, they are remained the small offices of the province and the prison. Today it is the seat of the provincial archives.

FORMER MONASTERY OF THE MINORITIES AND CHURCH

Also called the Gymnasial church, is of the 14th century. The church is one of the greatest churches in Slovakia and at the same time an example of the art of the ghotic's building in our country. Interior of the church it detaches the imposing greater altar with the gothic statue of the Madonna from the 15th century and with the baroque statues of the Hungarians king. The precious wall-paintings of the church are from the first part of the 14th century. 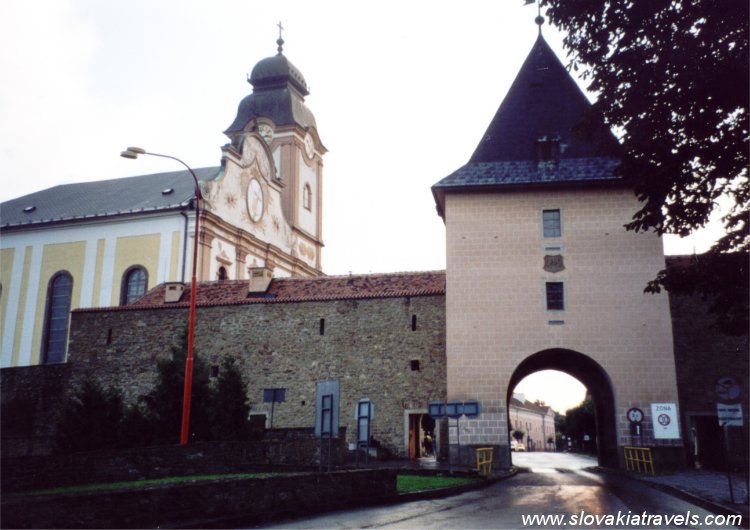 The first town fortifications already encircled the historical nucleus in the 13th century, for one length of 2,5 km. The fortification consisted of three gatehouses of which only two have been conserved until today: Vysna, now called Kosicka (of Kosice) and Menhardska. It walls were strengthened with 16-18 bastions and towers of which only five constructions have been saved.