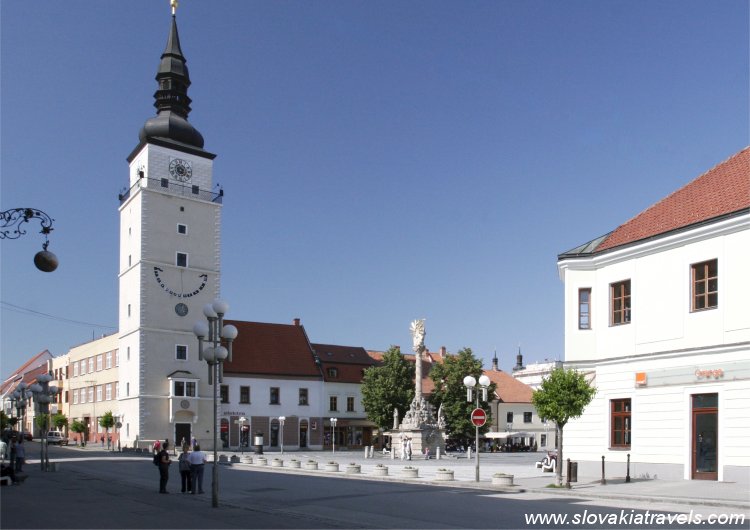 High 54 m, it is situated on the Holy Trinity square and it dominates the city. The tower was built in 1574 in Renaissance style. In the south-east part of the tower finds the solar clock. The golden statue of Immaculate a top the baroque cupola is high 2 m. Inside the statue were found in 1997 the historical documents of the past century, during its restoration, when was restored for the last time. 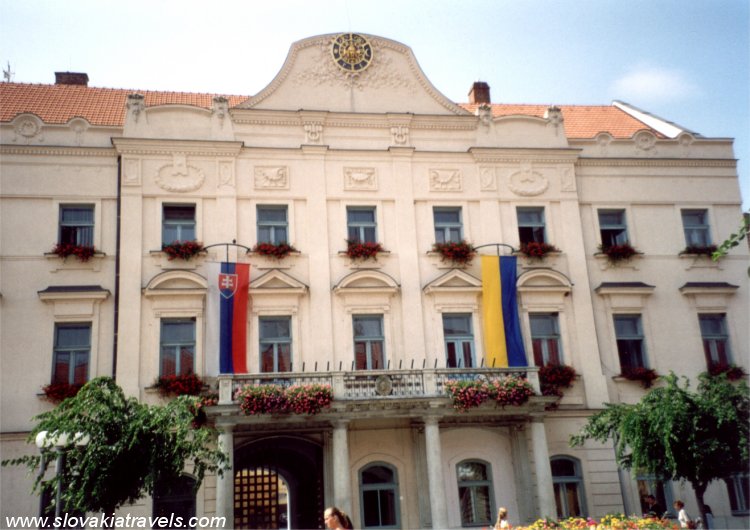 The previous medioevale building has been more times reconstructed. In 1791 it has been reconstructed in Classical style and later they have been puttinges baroque elements. Today it is the seat of the Trnava's mayor.

This baroque column was created in the 1695 by sculptor Jan Khien. The column with the statue of the Virgin Mary coronated by the Holy Trinity was removed by the Communists in 1948 and finally in 1993 it was re-erected and consecrated to its original place.

It is one of the most ancient churches in town, consecrated to St. Nicolas, patron of the merchants. This construction with three naves was built in Late-gothic style in 1380 and finished in the middle of the 15th century. 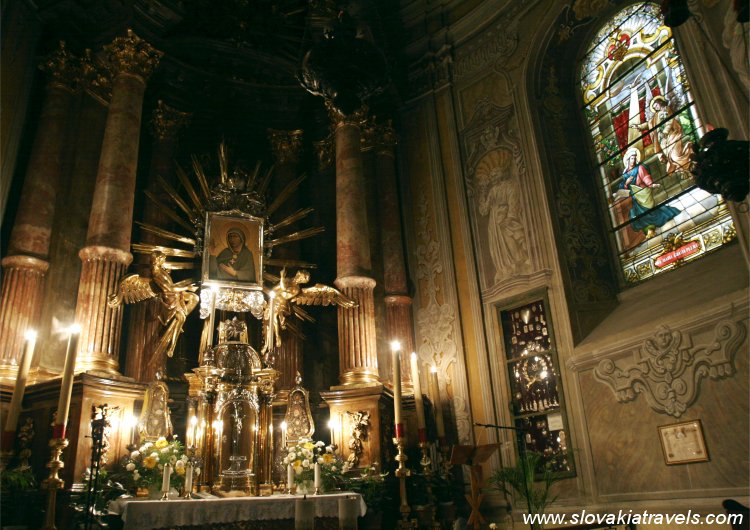 In the 18th century on the north part of the cathedral it was added the baroque chapel, in its middle is painting of Blessing Virgin Mary, also known as a picture of the graceful Virgin Mary of Trnava. The painting is of the beginning 16th sectury and it is a replica of a gracious painting of Virgin Mary exhibited in St. Alexei and Bonifacio Church in Rome.

It is situated of sideways to the cathedral. This Renaissance construction was built in 1562 on earlier Gothic foundations. In the 16th century there was added the wings of the courtyard and in the 1615 was built the archives and the library. Today it is the seat of Archbishop of the Trnava-Bratislava diocese.

CHURCH OF ST JOHN OF BAPTIST

Also called the University church is an of the most beautiful churches of Europe built in very first pure early-Baroque structure. It is the first sacred and monumental construction in this style in Slovakia. In the past it made part of the complex of the university buildings. The church of St. John of Baptist was built between the 1629 and 1637 on the site of a medioevale Dominican monastery and church. It is been planned from the Italian architects Peter and Antonio Spezzo to the orders of the palate Nicolas Eszterhazy.

In the church interioris dominates very precious wooden altar of 1640, constructed by craftsmen from Vienna B. Knilling and V. Stadler and is height 20,3 m and width 14,8 m. The paintings and stuccoes in the church interior are by renown Italian artists G. B. Rosso, G. Tornini and P. A. Conti. A part of the ceiling paintings is by the Viennese painter J. Gruber. The church had the spiritual functions,however, it was also a scene where theological disputes and the degrees took place.

BUILDINGS OF THE UNIVERSITY OF TRNAVA 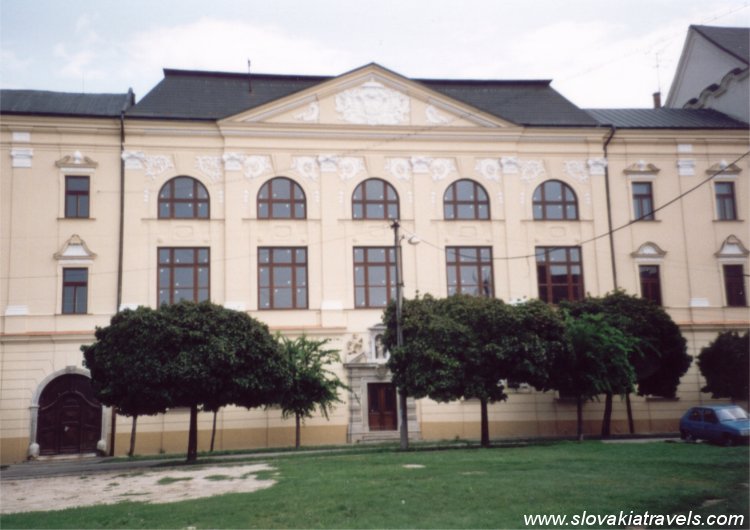 In very close distance from the University church the Jesuits have constructed their college, the grammar school and the university. In 1619 it has been constructed the college for the students of socially lower-classes. 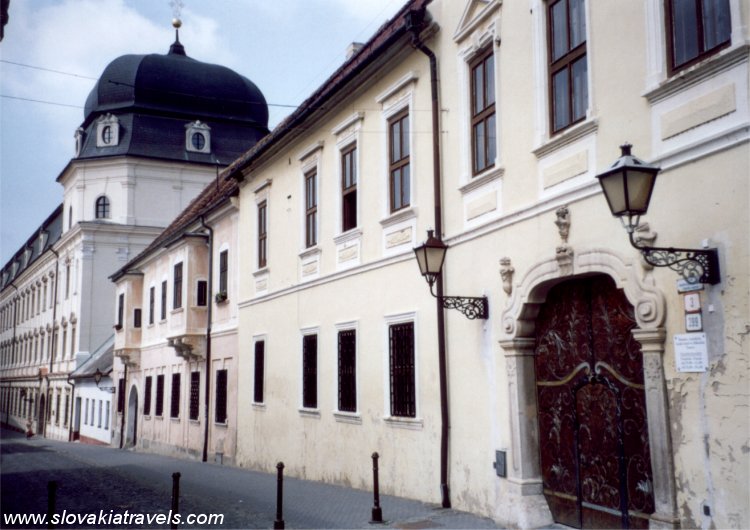 Later in 1665-1710 it has been constructed the Convict for so-called "red cassors". The Convict for the noble students is of 1747-54 and it is 4-stairs, 2-wings magnificient building situated in the corner. On the opposite corner there is the Seminary of St. Stephen, which was founded in 1724. The University of Trnava comprised the jurisprudence, theology and philosophy faculties. The medicine faculty has been completed in 1769. 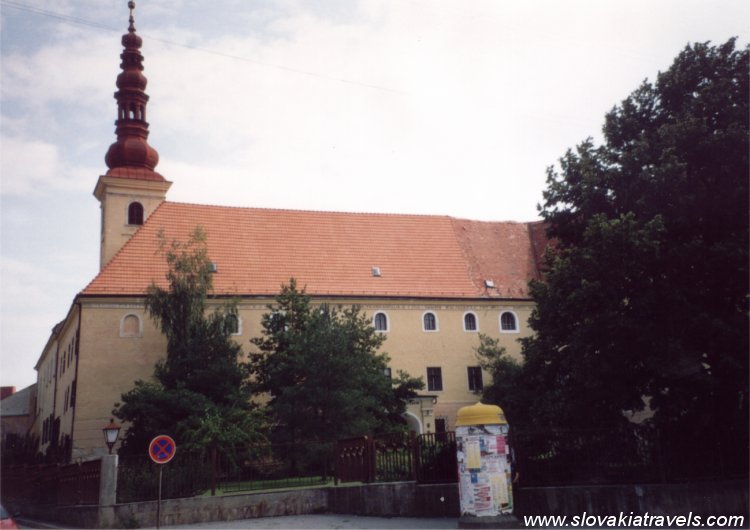 The church has been constructed in the 13th century as a one-nave Romanesque church. After the fire in the 17th century the the church was enlarged and restored in baroque style, and its baroque appearance has preserved until of today. Of the original furnishings to its inside has conserved the main altar from first part of the 18th century, three side altars and pews from the 18th century. Today it houses Western-Slovakia museum.

This one-nave Gothic church is the oldest of all churches in Trnava. It is was built in the 14th century and in the 17th century rebuilded in Baroque style. The church of St. Helen was a complex with the building of the former municipal hospital built in Classical style.

The Late-Baroque church with the convent and the twin towers has been constructed in 1729. The church belonged to the religious order of Trinitarians, who came to Trnava in 1712.
Following the abolition of this religious order the church with the convent was granted to the Jesuits, than they made it to reconstruct in 1875. The most precious decoration of the interior of the church is the painting of the Holy Trinity of 1758 on the main altar from the author F. A. Maulbertsch.

The theatre building is of 1831, was built in the Classical style with parts in art nouveau style.
It was the first Slovak theater built in stone. 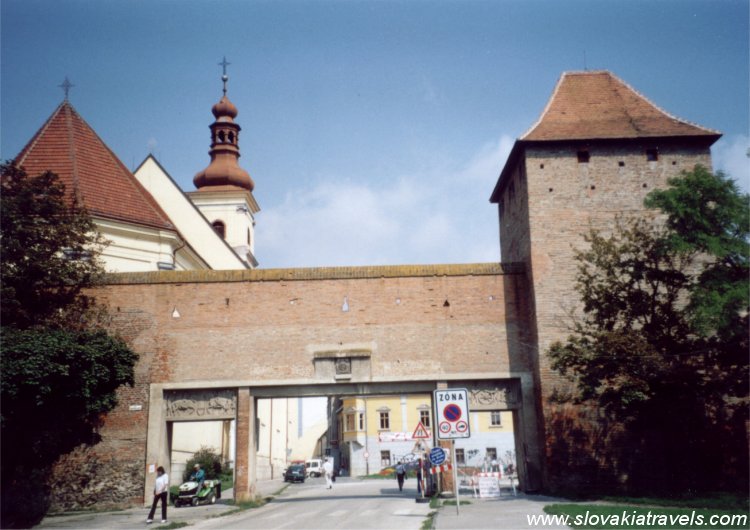 It is the most extensive cultural monument in Trnava. This Gothic fortification has been constructed in the 13th century, restored more times in the 14th, 15th and 16th. century.
In the western part it is situated the Bernolak Gate - only this gate was preserved until today. 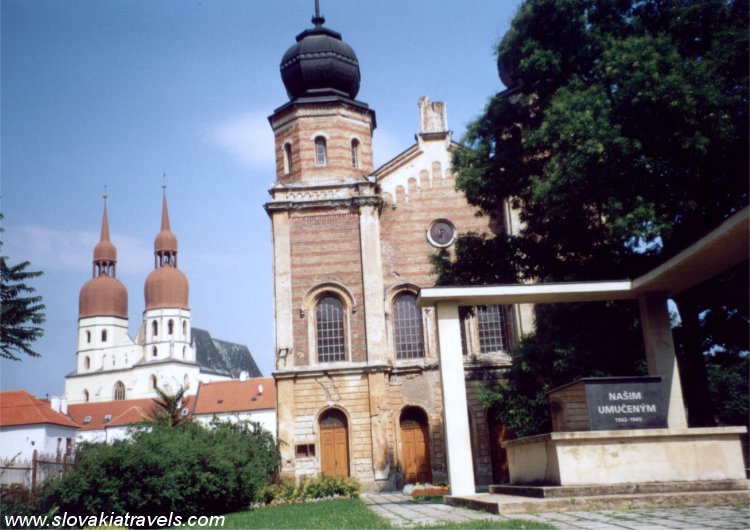 Orthodox synagogue dates from 1831. In front of the synagogue was erected in 1947 a memorial to murdered Jews during Holocaust (1938-42). After the reconstruction in 1994 onwards it is used by Gallery of J. Koniarek.

In the house it lived one of the most well-known inhabitants of Trnava, the musical composer Mikulas Schneider Trnavsky (1881-1958). Today to its inside it is situated the Concert room and the Museum with exhibition the only one of its kind of the musical tools.

The church has been constructed in 1640 on the site of an earlier Gothic construction of 1363. It is a one-nave church with the Convent complex also called the Franciscans church. In the year 1712 was touched up in Baroque style.
Its baroque aspect has been conserved until today. The furnishings to its interior are of the end of the 17th and the beginning of the 18th centuries.

The baroque church with one nave is of 1616 and represented the typical Protestant church without the tower. Today it is a catholic church.
Inside the church is situated the rich gilded main altar of 1731.

This Late-Baroque church with the convent is also called the Ursulinian Church. The structure dates from 1729 - 1776.
Under the altar of the Virgin Mary there is a tin coffinwith corpses of three martyrs from the town of Košice beneath a glass cover.