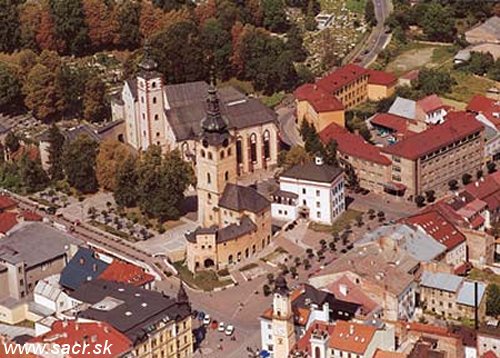 
THE CHURCH OF OUR LADY

Called also the German church. In originally was built in the Romanesque style. In first part of the 14th century the church was modificated in the Late-Gothic style. Inside the church in the lateral nave is found a precious Late-Gothic altar high 9 m, consecrated to Saint Barbara (patron of the miners), the work of the Master Pavol of Levoca. The higly prized bronze baptismal font from 1475 is the work of Master Jodok. After a fire in 1761, the church was restored in baroque style and in 1770 splendid baroque decoration was executed in its inside one.


THE CHURCH OF THE HOLY CROSS 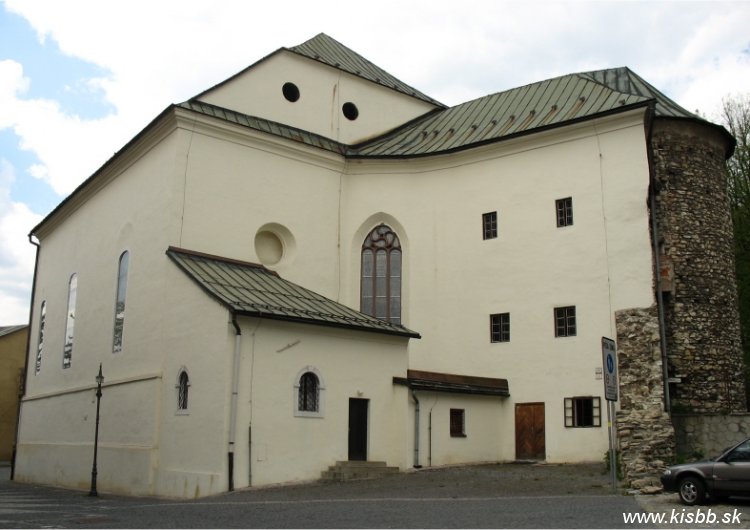 Was gradually built to the city walls in the castle area together with the Mathias's House and the Town hall in the 15th century. Its main altar with the ornamental sculptures of the Virgin Mary and Magdalene by Vavrinec Dunajský is the main eye catcher in the church. 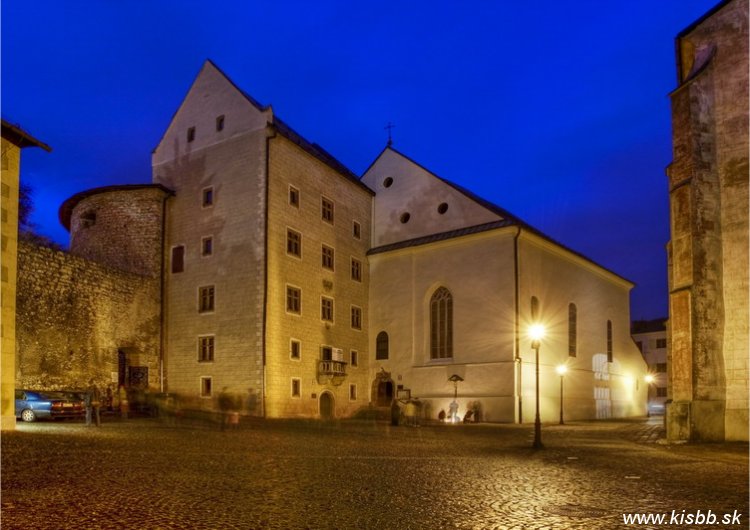 This five-storey late-Gothic building with a Gothic portal and stone console balcony was constructed in 1479 in the northern part of the castle complex for the Hungarian king Mathias's wife Beatrice. On the Facade are the coats of arms of the King Mathias and the town, dated from the year 1479. 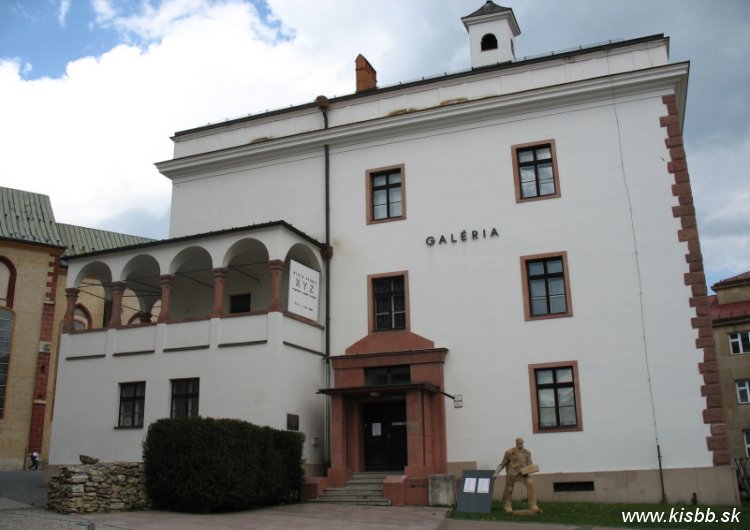 Dated from the year 1500 is decorated by Gothic, Renaissance and Baroque elements. The buliding is now the town's main art gallery.

In the castle area remained part of the city walls and three bastions: Clerical, Miner's and Parochial are preserved.

This ancient entrance was added to the city walls. On the right of the barbican is situated the Peterman Tower, that it came used like guard tower. Inside the tower are found three heavy bells. The biggest of them weighs 9900 kg.


THE SQUARE OF THE SLOVAK NATIONAL UPRISING


In the north part of the square SNP (Namestie SNP) are situated:

The tower is high 34 m. Before it had the function as a guard tower. The clock on the top dated from the year 1552 and worked in order nearly 200 years. The contemporary clock is of 1765. In the basement of the tower one found the prison and one old room of torture. Today the clock Tower comes used like a panoramic tower.


THE CHURCH OF ST. FRANCIS XAVIER 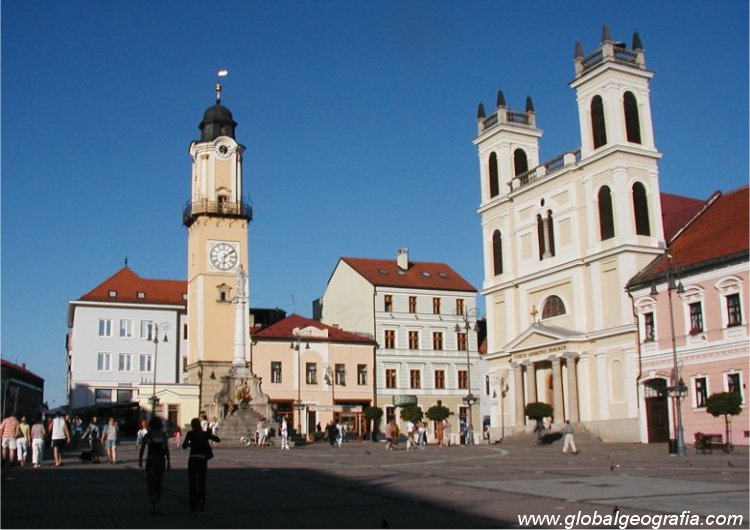 Built in 1715 on the site of the chapel of St. John the Baptist and on the house called Oberhaus. The church with one nave is the copy of the church " Il Gesù" in Rome. It is a Baroque building, later transformed into the classical style. The dominant twin-towers were built during the renovations in 1844. The church's interior from the first half of the 19th century consist of the Empire main altar, the side altars and the pulpit. 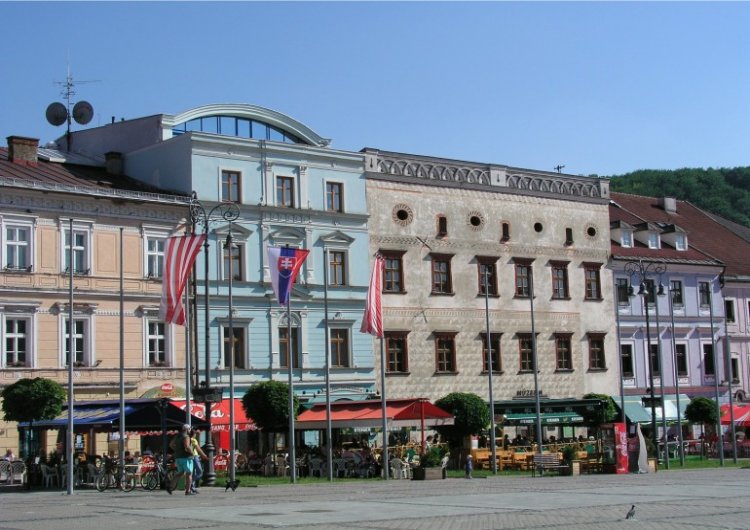 House No. 14 on the square. It is formed from two Gothic houses completed with some Renaissance elements with sgraffito decoration on the facade. Inside of the house they are found numerous wall paintings, two coats of the family of Anjou and Corvin, a wooden beam ceiling. In present the building is the seat of the Central Slovak Museum.

House No.19 is one of the most beautiful houses on the square. In the 1660 owner of the house was Tomas Benicky of Miciva, from which the house it has taken the name. It was restored in Renaissance style and on the north side was decoreted ingentilita with wall paintings and one loggia in venezian style. A lot interesting is Renaissance portale with written and the coat of arms of the Szentyvany family with the symbol of two miners dressed in solemn apparel.

House No.19 on the square wa built in 1783 in the classical style on the site of two Late-Gothic houses. After the fire in 1787 was renovated. It was the residence of the catholic bishop Stefan Moyzes.

The Column with a statue of the Virgin Mary in baroque style is situated in the upper end of the SNP square.

House No.22 on the square. It was constructed between the 15th and 16th century in Late-Gothic style, from the union of two Gothic houses. In the 17th century it was restored in Renaissance style.


THE CHURCH OF ST. ELIZABETH (SPITALSKY)

The church, in originally a part of the hospital was built in Gothic style with one nave in 1303. After 1750 the church was rebuilt in the Baroque style. The Gothic santuary thus became the side chapel of St. Anna. The main altar as well as the other interior furnishings are from the end of the 19th century.