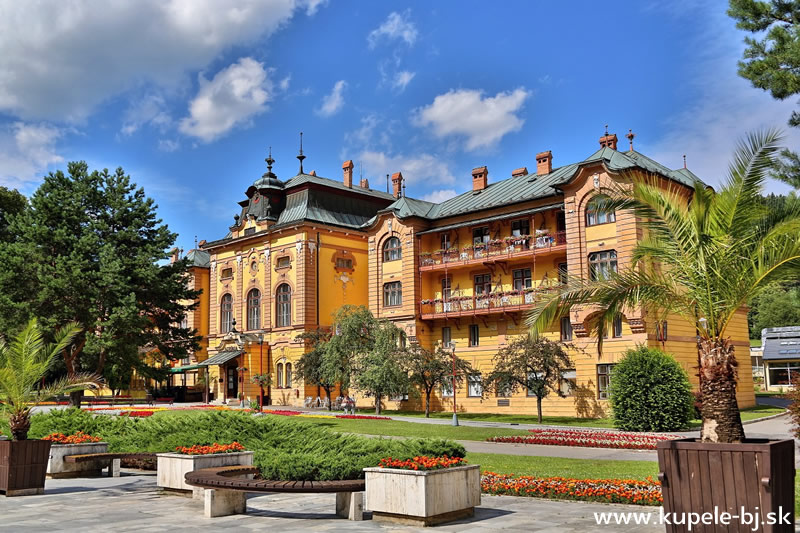 The Bardejov Spa lies 4 km from Bardejov. Already in the past century was very researched for its curative effects, above all for to cure of the metabolism diseases and the respiratory system diseases. Bardejov spa was in the past frequently visited by Hungarian nobility and some significant persons of history: the Austrian princess Maria Luisa (wife of Napoleon I.), Russian czar Alexander I. and also the Austrian empress Elisabeth, called Sissi (wife of Franz Joseph I.).

Indications: The spa has 17 sources with the mineral water asd hydrocarbonic - containing chloride and sodium - carbonic, cold, hypotonic, with a relatively high boric acid content. The total mineralization ranges from 1 600 mg/liter to 9 400 mg/liter, and that of carbonic oxide from 2 200 mg/liter to 3 800 mg/liter. The spa cure diseases like: blood circulation problems, diseases of gastrointestinal system, renal and urinary tract disorders, non-tubercular disorders of the respiratory tract, oncological problems.

Trips: walking in the forest park (300 hectares), the visit of the Open Air museum - it is a folk architecture museum that is situated in the Spa complex, visit of the historical town of Bardejov protected by Unesco.

Culture and entertainment:the concerts held daily in the summer at the small amphitheater by the colonnade, cinema, theater and other activities during the summer festival in the Spa. In the Open Air museum of Bardejov Spa are present two wooden churches. The first wooden church is devoted to St. Nicolas comes from the village of ZBOJ and was transferred here in 1967. The church is of 1706, consists of one nave, a sanctuary, babinec (a place for the women) and three towers to pyramidal shape. The more precious part of its interior is the iconostasis (part that separates the sanctuary from the rest of the church) in rococo style of 1766. The iconostasis of the 18th the century belongs to the most complete and precious iconostasis in rococo style in Slovakia. For the security reasons it is found in the Ikony exposure in the Saris museum in Bardejov. Between the most precious objects, it attracts the attention the double wooden cross, with the body painted from both the sides. 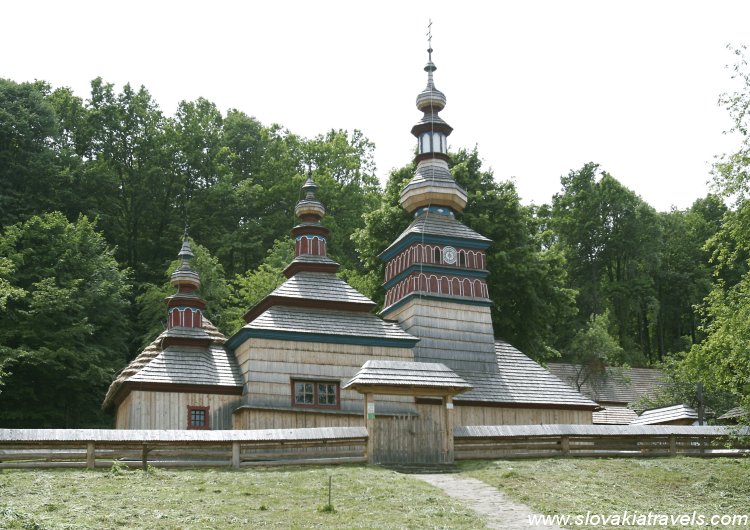 The second wooden church of comes from the MIKULASOVA village, was built in 1730 and was consecrated to the Protection of the Mother of God. This construction has three parts, and it is situated in the museum from 1931. For the security reasons the icons the icons were transferred to the Saris museum in Bardejov. 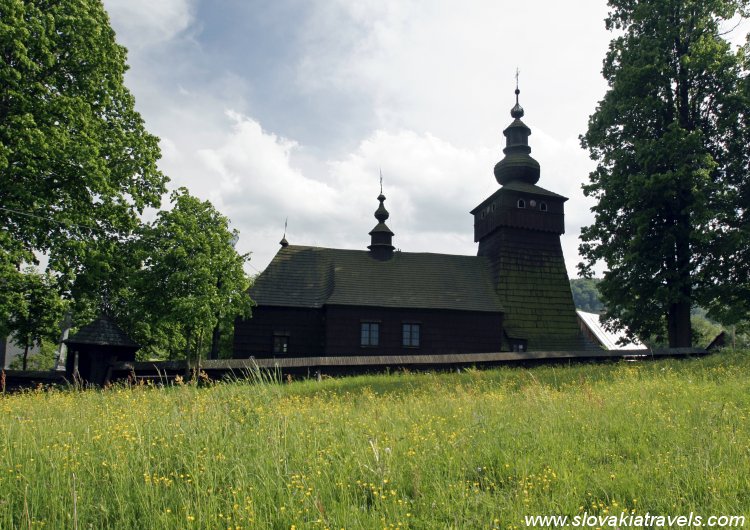 It is situated 20 km north-west from Bardejov. The Orthodox church of St. Archangel Michael was built in the 18th century. The log buildings consists of three parts and is covered with wooden shingles. The whole building is surrounded by the wooden fence. The iconostasis, which separates the altar part from the nave, is from 1830. The icons coming from the end of the 19th century are the part of it. The main altar where the Burying is presented, is from 1716. One of the three bells of the wooden church is of 1697. 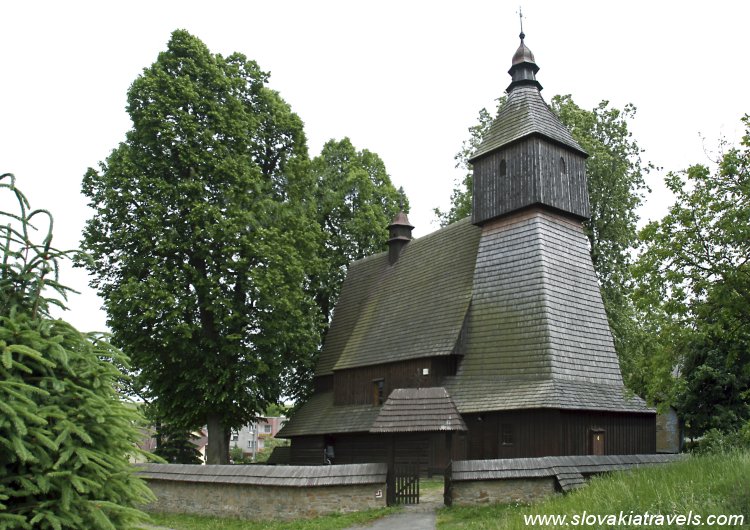 It is situated 10 km from Bardejov. This Roman-Catholic church of St. Francis of Asissi, built arround 1500 in gothic style is the oldest wooden church in Slovakia. The roomy church is of red spruce and yew. The whole roof is covered with shingles. The church consists of polygonal sanctuary, a nave, of a sacristy and of a tower. The nave interior from 1665 is richly adorned with wall-paintings with Latin citations from the Bible by of Andrej Hafcik. The most precious scenes are the scenes of Adam and Eve in the paradise, the fight between St. George and the dragon. 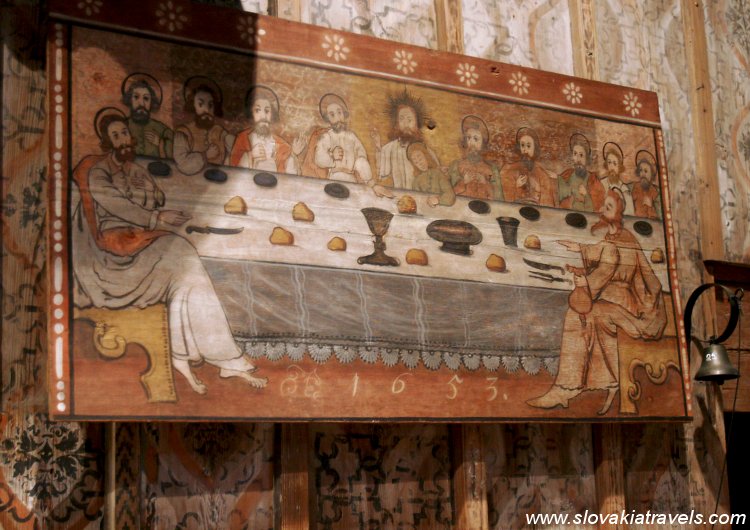 To the inside of the church are situated gothic tables of the main altar painted between 1460 and 1470, for example the tables of St. Francis of Assisi, St. Catharine of Siena, St. Barbara. There are also present other precious objects like the painting of the Last supper painted in 1653, a woodcut of Christ on the cross of 1710 and of St. George of 1741, a rococo candlestic, a goblet of 1739, a crib from the 19th century and one bell from 1753. 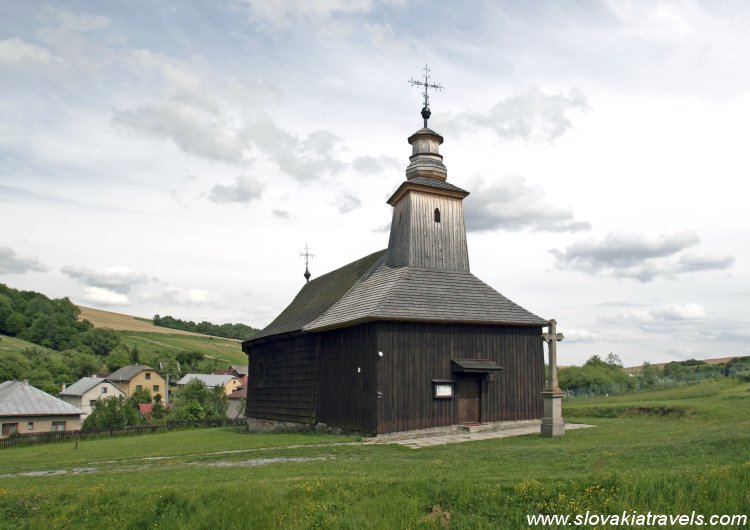 It is situated 15 km to the west from Bardejov. This Greek-catholic wooden church consecrated to St. Luke the Evangelist, was built in 1826. The whole complex is built on the stone foundation. The roof is of shingles. During the reconstruction in the 20th century the building got a simple saddle roof, and so it lost its three-tower character. The small western tower completed with the cupola and the cross was added. 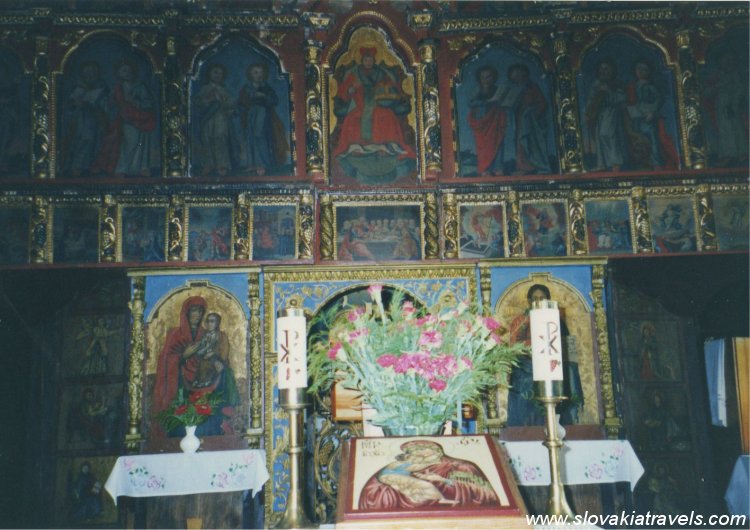 The most precious parts to its inside are the decoration painted in red well conserved, that they frame the advanced part of the ceiling and the iconostasis to three file from the 18th century. Of the original iconostasis of the 17th century they are conserved, after to have been taken apart, some icons painted on the wood: icon of St. Archangel Michael, icon of the Baptism of Christ in the Jordan river, the icon of the Saviour. Very precious one is also the renaissance cross from the 17th century. 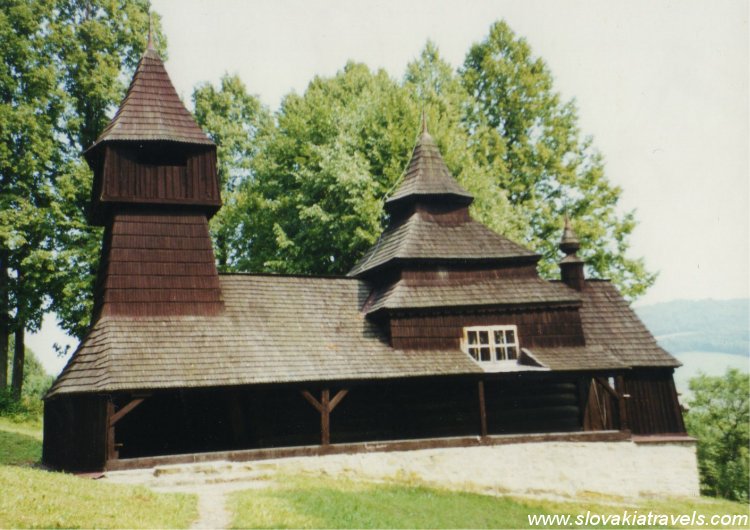 It lies 20 km to the west of Bardejov. The orthodox church of St. Cosmos and St. Damian was built between the 1708 and 1709 in baroque-gothic style. It is wooden log building built on the stone foundation with three sections and covered with wooden shingles. From the architectural point of view the extended roofed space is unique. The church is situated on the higher part of the village. The iconostasis is not unifield. The upper part comes from 1736, the lower part from the second half of the 18th century. The most precious pictures in the church are: the painting representing the Universal Judgment of the end of the 16th century, Deesis of 1680 and several other icons from 17th century. 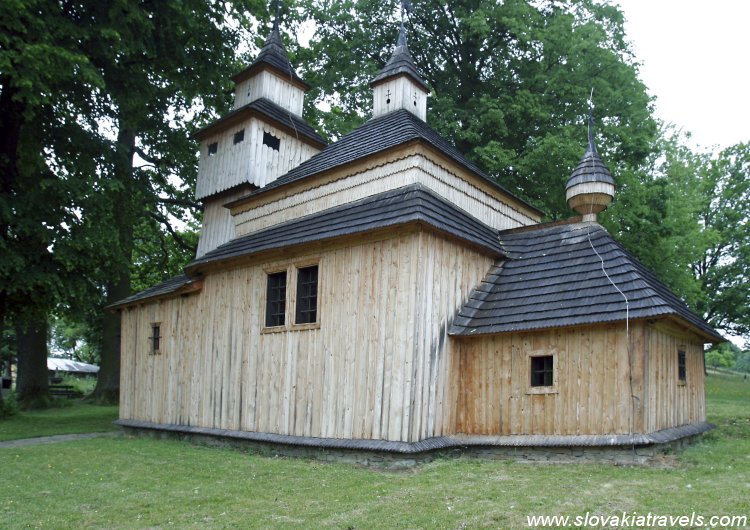 It lies to south-east of Bardejov is found 13 km. The Greek-catholic wooden Church of Meeting Jesus with Simeon was built in 1698. It is three-part wooden log building built on the the low stone foundation covered with wooden shingles. The church consists altar room, the nave and the woman part. On the inner walls there are very precious wall paintings from 1793 - 1797. They show the scenes from Old and New Testament. The iconostasis from the 18th century is atypical. It has only two doors: the main czar door for the priest and only one deacon door for the priest's assistants. The bell of the church from 1406 is among the oldest Gothic dated bells in Eastern Slovakia. 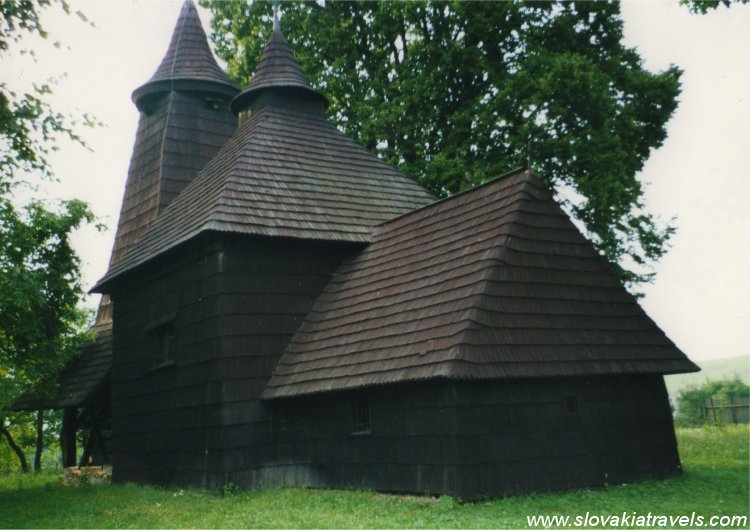 It lies 15 km to south from Bardejov. The Greek-catholic wooden church of St. Luke the Evangelist is situated in the center of the village. This wooden log building was built in 1739, uniform in three parts, based on stone foundations. The whole roof is covered with wooden shingles. To the inside of the church are found some precious objects from 17th and 18th centuries, for example: the complex of the icons from 17th century, the icons painted on the wood (of St. Luke the Evangelist of 1638, icons of the Crucifixion of 1634, St. Michael the Archangel of the 17th century) and a wooden poly chromed candlestick of the 18th century. 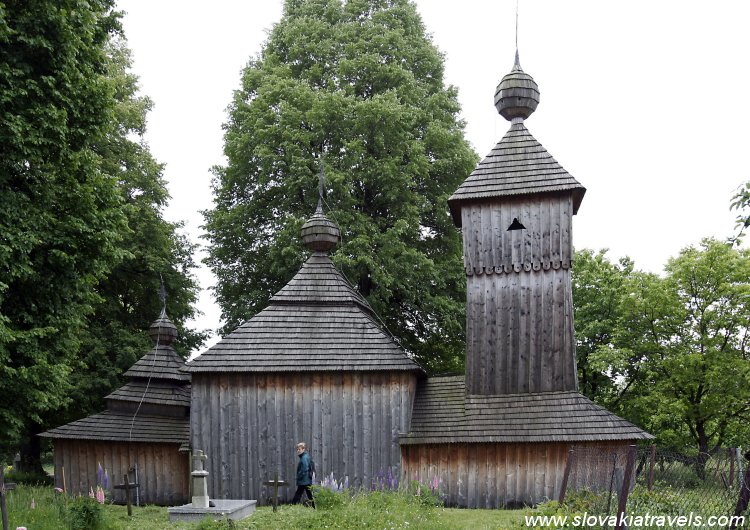 It is situated 16 km to northeast from Bardejov. This orthodox church of the Protection of the Mother of God is of 1763. It is a typical three towered wooden sacral log building from the architectural point of view. 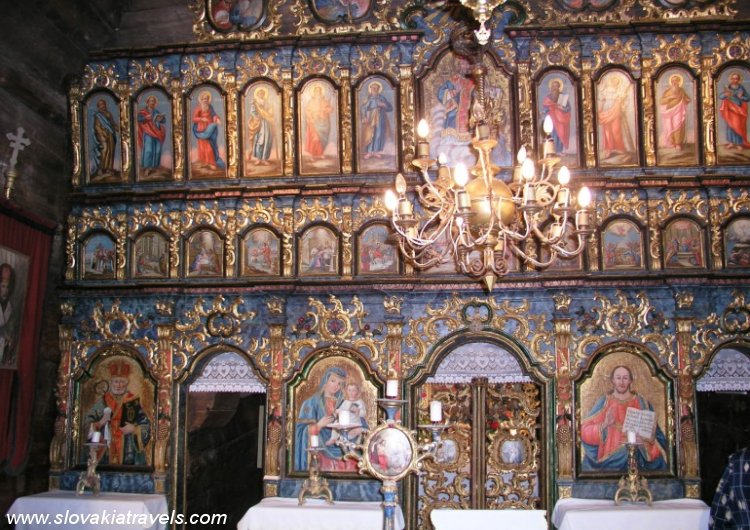 The church consists of the sanctuary, one nave and the small anteroom. The whole roof is covered with wooden shingles. The most precious objects to its inside are: the main altar in the sanctuary from the beginning of 19th century, the rich decorated iconostasis from 18 th century belongs to the most complete and precious iconostasis in rococo style in Slovakia, icons of the Last supper, the Mother of God in the sanctuary, of St. Nicholas, of Hodegertria and very precious wooden candlesticks. In the church are found some very precious and well conserved liturgic books of the 17th century.